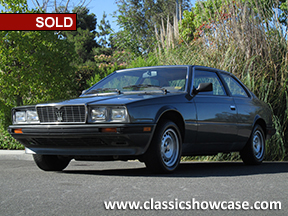 (SOLD) This is a one owner car bought from Alan Johnson Porsche in San Diego. It is a very original Biturbo that is factory equipped, in an attractive color combination, with many features such as an Alpine CD Player, manual transmission, A/C, power windows, and bucket seats. Classic Showcase has performed a recent service which makes the car ready for your driving pleasure.

The Maserati Biturbo is a sports car introduced by Maserati in 1981. The Biturbo is a two-door, four-seater notchback coupé (of somewhat smaller dimensions than the BMW 3 Series of the time) featuring, as the name implies, a two-liter V6 engine with two turbochargers and a luxurious interior. The car was designed by Pierangelo Andreani, an engineer from the De Tomaso team, somewhat influenced by the design of the newer Quattroporte III (Italdesign Giugiaro), as can be observed on the front fascia. When Alejandro de Tomaso acquired Maserati in 1976, he had ambitious plans for the marque. His plan was to combine the prestige of the Maserati brand with a sports car that would be more affordable than the earlier high-priced models that had traditionally made up the Maserati range. In fact, Maserati ceased making supercars like the ones developed under Citroën ownership altogether, like the Bora and Khamsin. The Biturbo was initially a strong seller and brought Italian prestige to a wide audience, with sales of about 40,000 units. De Tomaso also used another of his companies, Innocenti, to produce Biturbo body panels and also to provide final assembly of Biturbo’s Export versions came initially with a 2.5L V6, after 1989 it was enlarged to 2.8 liters, while for Italy a two-liter high-performance version was originally produced (to avoid the 38% sales tax imposed at the time on cars displacing more than 2000 cc). The aluminum 90-degree SOHC V6 engine was roughly based on the 2.0 L Merak engine, itself based on earlier V8 Formula One Maserati engines, designed by Giulio Alfieri (1924–2002).