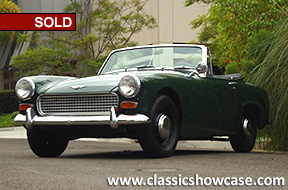 (SOLD) This cute little 1967 Series I Austin Healey Sprite is a wonderful sports car for the beginning collector looking for an entry level classic sports car. It can be great for daily transportation, or be a special weekend driver. It is dressed in a great color combination of British Racing Green with a Black interior and is a two-seater with chrome bumpers. It is in very good mechanical condition as it has undergone restoration by the previous owner, and has been recently serviced by Classic Showcase. With a 4 cylinder engine, SU carbs, and a 4 speed transmission it makes for a fun drive on those windy country roads with the top down. This Sprite is in very good driving condition, and is also collectible and hard to find in this condition.

The Sprite was a popular vehicle because it was small, sporty, were very economical, and they were easy to maintain with superb handling. The Austin-Healey Sprite Mark IV had been introduced in late 1966. The Mark IV had a larger, 1275cc power plant that offered 65 horsepower. The engine in the MKIV was similar to the one found in the Mini-Cooper 'S' but with less horsepower. There were little changes to this version in comparison to the prior versions. Wind-up windows and exterior door handles were much-welcomed luxury items. The rear suspension was changed to a fully elliptical leaf spring configuration. A new grille adorned the front while the body detailing changed slightly. The Mark IV remained in production from 1966 through 1971. Most of the Sprites were exported to the United States. They often differed from their European counterparts as the US versions were forced to comply with safety restrictions and federal emission control requirements. There were a total of 22,790 examples of the Mark IV produced.