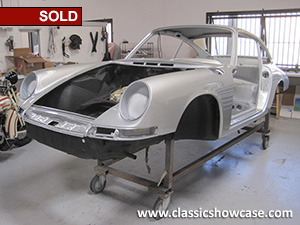 (SOLD) Classic Showcase is currently performing a Show/Driver level restoration on this early Porsche 912 coupe as it had all the desirable early features of a 912 which made it a great candidate for restoration. This coupe has had two previous owners and had been in storage for many years prior to our acquiring it. The engine has been freshly rebuilt to factory specifications, and all other systems are in the process of being rebuilt to the same high level. The transmission and the hydraulic system have been completely rebuilt, restored or replaced, all brake and fuel lines were replaced, and the gas tank was epoxy sealed. This 912 has many original mechanical features such as a 5 speed transmission, locking steering column ignition switch (which is very rare on the 912), three-instrument painted dash, factory European gas heater mounted in the smuggler’s box with controls on the dash, 4-screw front horn grille, and an original interior. Now it has updated CV’s, axles, new brakes, with a new suspension and rubber. During this rotisserie restoration, we metal finished the coupe, fit to a high level, primered, painted in base coat and clear coat, painted all the parts off the car, and wet sanded and buffed to a lustrous finish. The 912 is now dressed in silver with a proper new black interior in all the correct German materials that includes a new headliner, new panels, and carpet as well as a new windshield. The car will have about 100 test miles once completed. A Porsche such as this is a very collectible car that begs to be driven and enjoyed.

When the 911 debuted in 1964 the response from the market was enthusiastic, however, the high price eliminated many potential buyers. Porsche, in response, put the familiar 1582cc 4 cylinder of the 356 into the new 911 body and introduced a lower priced 911, the 912. The car debuted in the United States in 1965 when the 356 went out of production. The car was produced from 1965 thru 1969. This particular 912 spent the majority of its life in Salt Lake City, Utah. The previous owner saw the car sitting beside an oil company building in Utah (listed as Blachett Oil on the title) and purchased it. This 912 was built in 1965, making it a very early production Porsche which is one of the earliest manufactured 912’s.