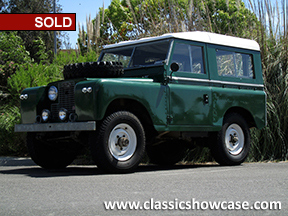 (SOLD) This vehicle was one of the last production runs in late 1968, and was therefore titled as a 1969 due to its delivery date, but bears all the specifications of a 1968 Land Rover. It has had minimal owners since new and previously received a frame off restoration with all systems gone through and documented with photos. It has been maintained in its original condition. The body is all aluminum, fitted with galvanized steel bracing for protection, a heavy box frame for strength, high gear range and rear wheel drive for open road cruising, low gear range for climbing and descending with 4 wheel drive for still more traction. It has been recently serviced by Land Rover professionals as documented by receipts. It is accompanied by an original tool kit, owners’ manuals, instruction booklet, photo album of restoration, and original brochures. This is a true classic all-terrain vehicle that is very sought after for its rarity, and collectability.

In 1968 there were over a half a million Land Rovers manufactured, just think how many there are today. Celebrities and dignitaries have owned Land Rovers. They have been transporting very important people to very important places for a half a century. This example is a Series IIA that sits on a short wheelbase that measures 88-inches. The IIA was produced from 1961 through 1971. The Series IIA was an improved version of the original design, consisting of a more powerful engine and longer wheelbase plus more rugged construction. In all respects, it was the Series IIA that gave the Land Rover marque its reputation. These all-terrain vehicles were given the nickname 'Landy'. The Model Series IIA was a hybrid between Series II and Series III and was produced for only six months, less than a few thousand made worldwide and very few have survived.