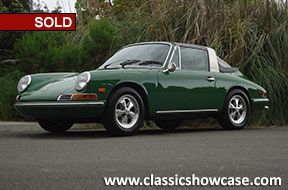 (SOLD) This rare and very collectible matching-numbers Soft-Window Targa is a California SWB car with very limited ownership, and was originally completed on April 30, 1968, destined for U.S. delivery. Finished in Irish Green over brown leatherette upholstery, the car was fully outfitted at the factory with more desirable instruments and an optional oil tank. Early service records dating back to 1970 indicate this car was a regularly used and cared for California car. As discovered, this Targa was a beautifully maintained example, loaded with character and originality. In recent years, the Targa underwent a professional restoration, while taking care to keep its originality intact; Porsche specialists were commissioned to rebuild the engine and transmission, and repaint the bodywork in the original Irish Green. This Porsche has seen very minimal use since restoration, and has been stored in a climate-controlled facility. Complete with a recent full service by Porsche specialists, this Targa remains in excellent running and driving condition, and provides the serious Porsche collector with a wonderful opportunity to own a coveted piece of 911 history. The market for early 911s is incredibly strong, and this pristine example is offered with owner’s manuals, tools, a substantial file of documentation, along with the Porsche Certificate of Authenticity.

Unveiled at the 1963 Frankfurt Motor Show, the new six-cylinder 911 was a bold step forward from the 356, thanks to the 2.0 liter air-cooled flat six engine and a distinctive modern body style. With tight handling and a 110 MPH top-speed, time would prove that the 911 was destined for a long and exciting life. But there was one aspect of performance motoring missing, an open air experience, until Ferdinand “Butzi” Porsche developed the innovative Targa Top. The 911 offered the first soft window Targa top, with a foldaway back window and removable roof section, maximizing the open-air experience. Porsche soon bowed to convention with Hard-Window Targa’s, making the Soft Window version one of the rarest and desirable from a great era for 911s. In particular, the 1968 models are sought out as the final evolution of the iconic first-generation 911 design. The combination of the early short-wheelbase 911 features and the unique open-air experience, these Soft-Window Targa’s have earned a devoted following among Porsche enthusiasts. The 1968 911’s thrilling performance and rakish good looks have proven with great success that quality design lasts a lifetime, and these fine cars will continue to remain a strong investment for many years to come. It’s a car that will command respect on the track or the show field, and will make an excellent addition to your collection. 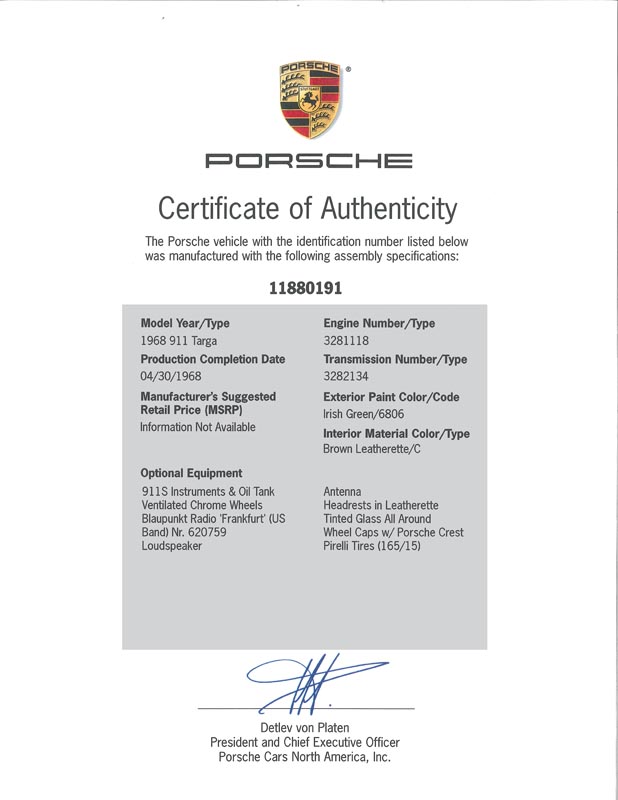