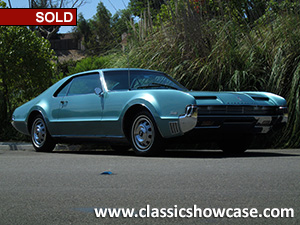 This beautiful and historically significant car was the first front-wheel drive automobile produced in the USA since the 1937 Cord. Oldsmobile spent seven years developing the Toronado. Prior to its introduction to the public, over 1.5 million test miles were performed to verify the strength and reliability of the Toronado's front-drive components. The Toronado sold reasonably well at introduction, with 40,963 produced for 1966. The car also gained great publicity for the division by winning several leading automotive awards, such as Motor Trend's Car of the Year Award and Car Life's Award for Engineering Excellence. It also was a third-place finisher in the European Car of the Year competition.