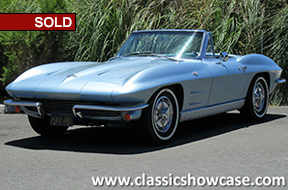 (SOLD) This spectacular two owner car is a California black plates car with matching numbers. This is a factory roadster with hard-top only. The car was in storage for many years, and ten years ago it was purchased by the second owner. Ten years ago the second owner took the car to a well-known Corvette expert in North County San Diego who serviced all the systems and rebuilt and replaced as needed. During this process, the Stingray benefited from a new repaint, new seat covers, serviced instruments, and had the bright work re-chromed as needed, with the goal of keeping the car as authentic and original as possible. It comes with factory hubcaps, a Delco AM/FM radio, and the factory hardtop. The hard top is going to need restoration, but it has been repainted body color. The soft top bows and tops are readily available if so desired. We believe the miles to be original from the overall condition of the car. The second owner had known this car since the first owner purchased it and believe it’s original. Here is a great opportunity to have a great Corvette that’s a high end driver with good history.

The 1963 Corvette String Ray was inspired directly from GM Styling Chief Bill Mitchell's 1959 concept car, the Sting Ray racer. Available in both coupe and convertible models, the 1963 Corvette featured hidden headlamps, peaked fender lines and a dramatic 'dual-cove' instrument panel. At the same time, Zora Arkus-Duntov, Corvette's engineer, had his staff create a totally new chassis with a four-wheel independent suspension which was essentially a frame-mounted differential with U-jointed half-shafts tied together by a transverse leaf spring - a design derived from the CERV I concept. Drivetrains were carried over from the previous generation, comprising four small block 327 V8s, three transmissions, and six axle ratios. All 1963 cars had 327cid engines; with an optional variant available that made 300 hp. As before, the base and optional units employed hydraulic lifters, a mild camshaft, forged-steel crankshaft, 10.5:1 compression, single-point distributor, and dual exhausts. The 300-bhp engine produced its extra power via a larger four-barrel carburetor (Carter AFB instead of the 250's Carter WCFB), plus larger intake valves and exhaust manifold. The Sting Ray was also a somewhat lighter Corvette, so acceleration improved despite unchanged horsepower. Hydraulically assisted power steering was also offered for the first time. The drum brakes were still used. The optional sintered metallic linings and finned aluminum brake drums were offered and allowed greater fade resistance and better cooling. Options available on the C2 included AM-FM radio (mid 1963), air conditioning and leather upholstery. New for the 1963 model year was an optional electronic ignition, the breaker-less magnetic pulse-triggered Delcotronic.