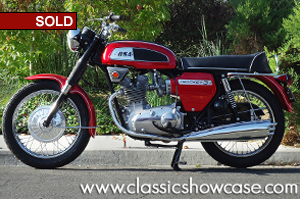 (SOLD) This may be the finest example of a restored 1969 BSA Rocket III you will ever see. This is a close to 100 point ground up restoration. Every single piece of this motorcycle was disassembled, inspected, and refurbished to better than original specifications. The work was completed by a technician with over 30 years’ experience riding and restoring BSA and Triumph Triples. The engine was completely rebuilt from the crankshaft up. No expense was spared during the rebuild and only the best quality parts were used. The rebuild included reground crankshaft, all new bearings, new pistons, rings, valves, guides, and springs. New copper base, head, and rocker box gaskets were installed. The drivetrain up-grades included a new clutch plate, clutch hub, clutch throw-out bearing, and shock absorber rubbers as well as a new engine sprocket, rear wheel sprocket, and drive chain. Both wheels include new rims, Buchanan SS spokes, new tires, tubes, and wheel bearings. The electrical system has been up-graded with a Tri-Spark electronic ignition and a Sparx solid state regulator-rectifier. The carburetors were completely rebuilt including new needles and jets. Extended ticklers were installed as well as vacuum taps. After completion, the engine was started, the oil pressure was checked, and the carburetors were balanced. The bike was then ridden a few break-in miles to make sure everything was working as it should. A complete description and detailed list of work performed is available upon request. If you have never had the opportunity to ride a properly tuned and sorted out Rocket 3, this is your chance. Everything on this bike works as it should. This BSA Rocket III is ready to be shown or ridden, and will make an excellent complement to any collection!

Introduced in 1968, the 750cc, 125mph three-cylinder Rocket III was crucial to BSA, whose future hinged on the bike’s success. The Rocket III was critically acclaimed by the motorcycling press, which labeled it the world’s first Superbike. BSA earned its reputation with four-stroke singles and twins, but in 1968, the company broke with tradition and introduced the three-cylinder BSA Rocket 3 motorcycle. Nearly a clone of the Triumph Trident, the Rocket 3 was powered by an alloy 750-cc overhead-valve engine producing 58 horsepower -- enough to propel the bike to near 120 mph. The original Rocket models were for export only and it was not until 1969 did British customers come to grips with synthesis machines.