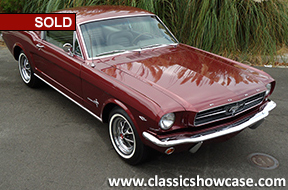 (SOLD) This stunning 1965 Ford Mustang 2+2 Fastback has completed a recent high level rotisserie restoration to a Show level. This is a true original A-Code Mustang featuring its 289 V8 225hp engine, factory A/C, fold down rear seats, and comes with power steering and a Philco AM push button radio. This 1st year Pony Classic is nicely appointed with a palomino interior, and has benefitted from a bare metal repaint done with the correct vintage burgundy paint. The bottom of car has been entirely restored as nice as the topside. This pony comes with the Ford factory owner’s manual, and is documented with a plethora of pictures of the restoration process. This Fastback shows no disappointments and is ready to ravage the road, or be shown in a local show.

The first-generation Ford Mustang was manufactured by the Ford Motor Company from 1964 until 1973. The introduction of the Mustang created a new class of automobile known as the pony car. The Mustang’s styling, with its long hood and short deck, proved wildly popular and inspired a host of imitators. It was initially introduced as a hardtop and convertible with the fastback version put on sale the following year. At the time of its introduction, the Mustang, sharing its underpinnings with the Falcon, was slotted into a compact car segment. The standard interior features of the 1965 Mustang included adjustable driver and passenger bucket seats, an AM radio, and a floor mounted shifter in a variety of color options. Ford added additional interior options during the 1965 model year. The Interior Decor Group was popularly known as "Pony Interior" due to the addition of embossed running ponies on the seat fronts, and also included integral armrests, wood grain appliqué accents, and a round gauge cluster that would replace the standard Falcon instrumentation. Also available were sun visors, a (mechanical) remote-operated mirror, a floor console, and a bench seat. Ford later offered an under-dash air-conditioning unit, and discontinued the vinyl with cloth insert seat option, offered only in early 1965 models.