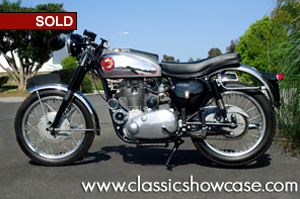 (SOLD) This 1960 Gold Star is arguably the most desirable of its type, in Clubman’s specification. The 499-cc engine was reportedly used in a racing Clubman before being fitted to this machine and has all the correct features, including rare AMAL GP carburetor, RR T2 close-ratio gearbox and aluminum wheel rims. The subject of an extensive restoration completed in 1993 by marque specialist John Gleed, it has seen nominal use since and comes with a file containing invoices of the work carried out. Presented today in superb condition throughout, it has recently benefitted from a service and general check over.

The BSA Gold Star derived from an alcohol-fuelled factory Empire Star ridden by Walt Handley to victory at Brooklands in 1937. Handley had retired the year before, but he roared back at an average speed of 102.27 mph and a fast lap of 107.57 mph. By breaking the 100 mph mark, Handleywas awarded a gold star lapel badge, and the new model followed soon after. Always competitive, by the mid-1950s Gold Stars dominated the Clubman’s TT race at the Isle of Man – 33 of 37 entries in 1955 being Gold Stars. When Bernard Codd won both the Senior and Junior Clubman’s events in 1956, the class was dropped. Naturally, such high-profile success meant that every boy dreamed of owning a “Goldie" with a crackling exhaust and low, clip-on handlebars. First gear was deliberately high so that almost 60 mph was possible. Also successful in trials and scrambles, the Gold Star was dropped in 1963 as BSA claimed it was too expensive to build.