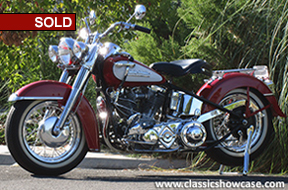 (SOLD) This 1952 Harley Davidson FL Hydra Glide Panhead, with a hand shifter, was completely rebuilt by Jim Beck, a well-known and respected motorcycle restorer. No expense was spared on this very meticulous restoration that has matching frame and engine numbers. With its beautiful color scheme of red and white highlighted by its britework, makes the bike extremely handsome and desirable. This highly collectible bike offers the discerning motorcycle collector looking for an investment quality motorcycle an excellent opportunity to own of a piece of American motorcycle history. It is one piece of fine art to be admired and displayed proudly.

The 1952 Harley-Davidson FL Hydra-Glide proved a major step for Big-Twin engines, when the old hand-shift/foot-clutch arrangement was superseded by a modern foot shift and hand clutch. However, the old setup was still optionally available -- and would remain so until the mid-1970s -- as it was still preferred by some riders and police departments. 1952 was also the last year of the FL - large-frame model. FL is a model designation used on motorcycles manufactured by Harley-Davidson from 1941 to present. Mostly applied to Harley's large-framed bikes, including the current Touring series, the FL designation is also used with their Softtail series, especially on Softtail’s with traditional styling, 16-inch front wheels, and either Springer forks or large-diameter telescopic front forks. Never one to turn a deaf ear to its customer's wishes, Harley continued to lavish its bikes with more chrome and polished pieces. Some additional bright work was made standard, such as polished lower fork legs (which were at first painted black), while accessory packages offered such niceties as chrome fender rails, chrome instrument panel, and chrome front-fender lamp. Panhead’s were produced from 1948 to 1965.