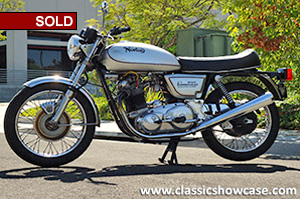 (SOLD) An unrestored, all original, matching numbers 850 with original paint and chrome. It is in very good condition, runs great and has an electric start. This Commando has been well maintained and cared for. It is hard to find survivor bikes that are all original. For the collector that is looking for originality and an unmolested bike with patina, this is a great addition to your collection.

The Commando is a Norton-Villiers motorcycle with an OHV pre-unit parallel twin engine, launched by the Norton Motorcycle company in 1967. Initially a nominal 750 cc displacement, actually 745 cc, in 1973 it became an 850 cc, actually 828 cc. During its ten years in production, the Commando was popular all over the world. In the United Kingdom it won the Motor Cycle News "Machine of the Year" award for five successive years from 1968-1972. Given that its engine was an old pre-unit design, even Norton's chairman, Dennis Poore, expressed surprise at the Commando's remarkable success. While it looked outwardly similar to the Commando 750 it replaced, the 850 (actually 828cc) debuted a number of new features destined to improve reliability. The bottom end problems of the Combat engine had been rectified by the introduction of new roller main bearing in 1972, but Norton still erred on the side of caution for the 850 by running a milder camshaft and 7.7:1 compression ratio. Thanks largely to the Combat engine, Norton’s reputation had taken a hammering, so the precautionary changes were implemented to ease stress on the engine and thus improve reliability. Upon its 1975 debut, the Mk III looked outwardly similar to the Commandos that had preceded it, but a lot of changes had been made. The most notable, was the left-foot gear change. This was done in line with US legislation that made a left-foot gear change mandatory, and brought Norton into line with the Japanese manufacturers, whose dominance of the market had essentially made this feature standard. Additionally, the Mk III Commando featured a rear disc brake for the first time, and also debuted an electric starter. A later conversion to a stronger four-brush starter helped, and a lot of Commandos today have had this modification made, along with modern starter sprag clutches and electronic ignition for better, more reliable starting and running. By the end of 1975, most Commandos were being fitted with the larger Interstate tank, which had been reshaped to improve rider comfort. The Mk III’s redesigned handlebars also came in for praise as being the most comfortable of all iterations of the Commando