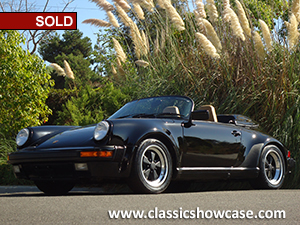 (SOLD) This 911 Speedster was one of only 830 Speedsters to come stateside, all of which came with the widened stance of the Turbo. Coming in the elegant color combination of Black over Tan leather, this Speedster shows only 57,704 miles since new. The Speedster also sports a number of options, including a raised hub steering wheel, limited slip differential, short shift transmission, and a Blaupunkt stereo. As well, the 911 came equipped with a set of rare, lightweight, manual adjustment "Speedster Seats". These Speedsters have become modern collectibles thanks to their low production numbers, sinister good looks, superb handling, fantastic brakes and most importantly their unique roadster feel. Furthermore, as the last of the 3.2-liter 911s, Speedsters are considered to be some of the best sorted, and most enjoyable of the air-cooled 911’s as well as the best investments

Code named the Porsche M503 "Speedster" it was a great dedication to the original low-roof version of the Cabriolet which was a direct descendant ....evocative of the 356 Speedster. Once again, it was produced in low volume with only 2104 built for the USA and the ROW (Rest of World) total. Production started in January and continued through the summer of July 1989. Of the 2,104 built, 171 were the Narrow Body Version. That leaves 1933 wide body versions, and only 830 of those were U.S.A. bound. As it turned out, all but 159 wore the Turbo Look package, but everyone got the Turbo's beefier chassis and heavy-duty four-piston cross-drilled disc brakes. But because it was designed pre-Carrera 4, it was not a Porsche 911 of the future. In fact, the '89 Speedster would be the last air cooled 911 model built at the old Stuttgart factory. Starting with the 964 chassis, Porsche shifted all new production to a more modern plant near its headquarters. Actually, that fact has done more to BOLSTER the 1989 Speedster's value than hinder it. The factory brochure read: "This 1989 six cylinder engine model range is enriched with a new model version, the "911 Speedster". It is based on the 911 Carrera. A shorter windshield and manually operated temporary canvas top, which is stored underneath a rear lid made of plastic (sic: fiberglass), are the main features of this 911 Speedster". 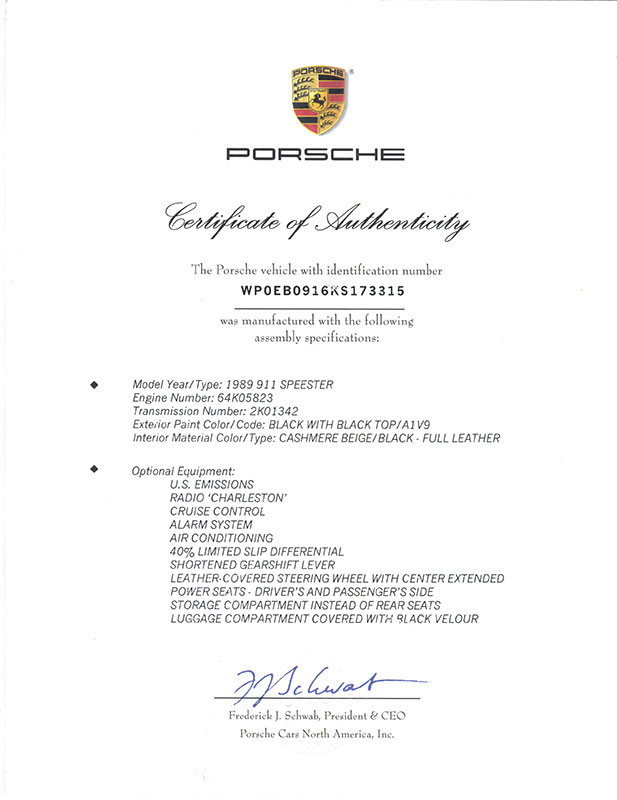