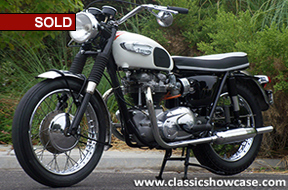 (SOLD) This matching numbers 1966 Triumph Bonneville was restored by renowned restoration specialist Baxter Cycle in Marne, Iowa. Previous owner purchased the bike in 2007 and it had been his dependable Sunday rider ever since. The bike was restored to correct 1966 specifications including the correct 2 ½ gallon teardrop gas tank painted Alaskan White with Grenadier Red stripes highlighted with gold pin striping. The engine, transmission and clutch were completely rebuilt when the restoration was carried out. The only deviations from the original specifications were two upgrades to improve performance and reliability. A Boyer electronic ignition was installed replacing the dual points and later-model Triumph AMAL 930 Concentric carburetors replacing the original AMAL 389 Monobloc carbs. The bike comes with a California title. This is a one kick bike!

The Bonneville T120 was Edward Turner's last production design at Triumph (in retirement Turner designed the Triumph Bandit/BSA Fury which did not pass the prototype stage before BSA went under). With a 649 cc (39.6 cu in) parallel-twin (two-cylinder) engine the T120 was based on the Triumph Tiger T110 and was fitted with the Tiger's optional twin 1 3/16 in Amal Monobloc carburetors as standard, along with that model's high-performance inlet camshaft. Launched in 1959 by Triumph as "The Best Motorcycle in the World", the Bonneville T120 was aimed mainly at the lucrative US market where enthusiasts were demanding extra performance. Initially produced with a pre-unit construction engine which enabled the bike to achieve 115 mph without further modification, the power tended to induce high speed wobbles from the single down tube frame, so in 1963 a stiffer and more compact unit construction model was introduced, with additional bracing at the steering head and swinging arm. The steering angle was altered and improved forks were fitted a couple of years later, which, together with the increased stiffness enabled overall performance to match that of the Bonneville's rivals.