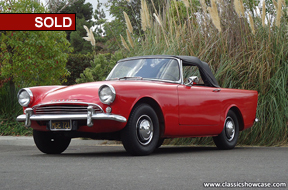 (SOLD) If you've wanted to get into driving, enjoying, and collecting a classic vehicle but don't have the need to acquire a fully restored show car or trailer queen, then we have just the car for you. Here is a wonderful opportunity to own a vintage sports car at an introductory level price. This driver/project level California black plate Sunbeam Alpine Mark II is a true classic, and would give the new enthusiast a great start in building their collection. At the same time, the roadster stands as an exceptional candidate to take to a higher level as you drive and enjoy the vehicle. The previous owner inherited the roadster, and was an active duty U.S. Air Force mechanic who regularly serviced and maintained the car at his garage in the Coronado community of San Diego, CA. During his ownership, his primary goal was to make this car an enjoyable, dependable driver that would be ideal for drives along the coast, cruising on warm summer nights, and to simply turn heads of admirers of such unique retro automobiles. The car includes a fairly new convertible top, along with many original materials including the original owner’s special tuning guide, lubrication charts, Sunbeam catalogs, tonneau cover, tools, jack and spare tire.

The Sunbeam Alpine is a sporty two-seat open car from Rootes Group's Sunbeam car marque. The original was launched in 1953 as the first vehicle from Sunbeam-Talbot to bear the Sunbeam name alone since the 1935 takeover of Sunbeam and Talbot by the Rootes Group. The Series II of 1960 featured an enlarged 1592 cc engine producing 80 bhp and revised rear suspension, but there were few other changes. When it was replaced in 1963, 19,956 had been made. A Series II with hardtop and overdrive was tested by The Motor magazine in 1960, which recorded a top speed of 98.6 mph (158.7 km/h), acceleration from 0–60 mph (97 km/h) in 13.6 seconds.