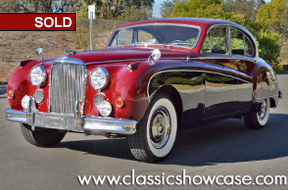 (SOLD) This beautiful, matching numbers, Southern California 1959 Jaguar Mark IX has been well maintained and lovingly cared for by Jaguar professionals throughout the last 26 years of single ownership. With flowing lines, and also plenty of patina, it is surely a head turner. More than just good looking, it is in very good running and driving condition, and had been driven regularly to keep everything in proper order. Recently it benefitted from an interior restoration where the complete interior was changed from red vinyl to tan leather. It was finished off with all new panels, and fitted carpet. It had been featured on the cover of Collectible Automobile Magazine in October of 2013, were it had a feature story written about it as well. It was pictured with its previous interior. This elegant beauty had been owned by a Southern CA Jaguar Club member who aptly named it “Scarlet 9” and drove it to the local shows and events instead of trailering it. It has been campaigned at the South Coast Botanic Garden Jaguar Show, and won Best of Show in its class several times. It has also been entered in many other Concours’ winning awards, multiple times. It has the rare bucket seats and deep, rich wood accompaniments to complete the stylish look. It features a Radiomobile radio, an original owner’s manual, a file of receipts, and its original tool kits. This is a collectible car that is appreciating in value and would be a fine addition to anyone’s Jaguar collection.. 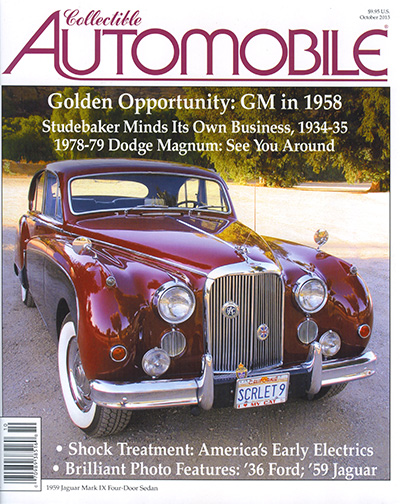 The Jaguar Mark IX is a large luxury saloon car produced by Jaguar Cars between 1959 and 1961. It replaced the previous Mark VIII, and differed little in exterior appearance except for the new model name. Standard transmission was a four-speed manual system: options included overdrive, but most cars were built with a Borg Warner three-speed automatic box. Internally, an enlarged-bore 3.8 L, 220 bhp DOHC straight-6 replaced the previous 3.4 L 190 bhp unit. Two SU carburetors were fitted. Four-wheel servo assisted Dunlop disc brakes and recirculating ball power steering was now standard equipment. The torsion bar independent front suspension and leaf-sprung rear live axle were retained from the Mk VIII. The body was generally similar to its predecessor, but the sunshine roof became a standard fitting for the UK market. The interior was in the same luxurious mode with extensive use of leather, walnut wood trim and deep pile carpet. A range of single and duo-tone paint schemes was offered. Between 1959-1961 Jaguar produced 10,009 Mark IXs.