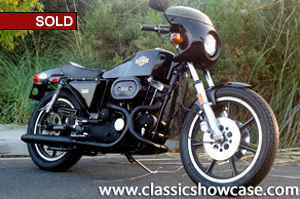 (SOLD) Some motorcycles lead a hard life; and some, like this fine Cafe Racer, are lucky enough to be pampered from new. It spent much of its life on display at a prominent Harley Davidson dealership, has been exercised, and has recently received a major servicing, making it completely road ready for your riding pleasure. It has been meticulously preserved in 100% stock condition from new, right down to the original Goodyear A/T Eagle tires and includes a factory owner's manual. With just 1,650 original miles and from a prominent collections, some may think the toughest choice here will be whether to preserve its fantastic condition, or crank it up and enjoy the brute power and performance on a twisty country road. This fine XLCR is a rare and highly collectible American motorcycle, exuding all the power, performance, and style that only Harley Davidson can deliver!

First released in 1977, the XLCR was quite a bold departure from the Harley-Davidson formula. A Sportster in café-racer clothes, it was in production for just two years and has become one of the most interesting and collectible of modern Harleys. With much input from then-new styling chief Willie G. Davidson, the short-lived XLCR (XL denoting the Sportster family, CR for Café Racer) comprised a lightweight frame and standard Sportster engine. The gas tank and tailsection had a certain XR750 dirt-tracker feel, but stretched and streamlined, complemented by low-rise handlebars and a bikini fairing up front. Morris mag wheels and triple disc brakes were used, along with a Siamesed exhaust system in black chrome. The bike's production ceased in 1978 after less than 2000 examples had been manufactured, assuring its collector status. This unrestored first-year XLCR has been preserved in absolutely stock condition.