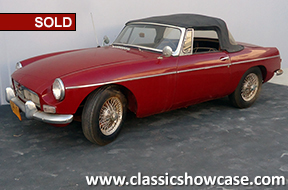 (SOLD) This is an early, pull handle MG B Roadster with original California black plates. It has been in storage for 20+ years and is 98% complete. This is an excellent candidate for restoration to a Show or Show / Driver level. You are welcome to buy the car “as is”, or commission Classic Showcase to restore it for you in any color combination you wish and with whatever amenities your desire.

The MG B is a sports car launched by MG Cars in May 1962 to replace the MG A. The roadster was the first of the MG B range to be produced. The body was a pure two-seater but a small rear seat was a rare option at one point. By making better use of space the MG B was able to offer more passenger and luggage accommodation than the earlier MG A while being 3 inches (75 mm) shorter overall. In structure the MG B was an innovative, modern, design in 1962, utilizing a monocoque structure instead of the traditional body-on-frame construction used on both the MG A and MG T-types. However components such as brakes and suspension were developments of the earlier 1955 MG A with the B- The lightweight design reduced manufacturing costs while adding to overall vehicle strength. The suspension was also softer, giving a smoother ride, and the larger engine gave a slightly higher top speed. The four-speed gearbox was an uprated version of the one used in the MG A with an optional (electrically activated) overdrive transmission. Wind-up windows were standard, and a comfortable driver's compartment offered plenty of legroom. A parcel shelf was fitted behind the seats. The MG B’s s performance was considered brisk at the time of its introduction, with a 0–60 mph (96 km/h) time of just over 11 seconds, aided by the relatively light weight of the car. Handling was one of the MG B’s strong points. The 3-bearing 1798 cc B-Series engine produced 95 hp (71 kW) at 5,400 rpm. The engine was upgraded in October 1964 to a five-bearing crankshaft in an effort to improve reliability. The majority of MG B’s were exported to United States. The MG B was one of the first cars to feature controlled crumple zones designed to protect the driver and passenger in a 30 mph (48 km/h) impact with an immovable barrier