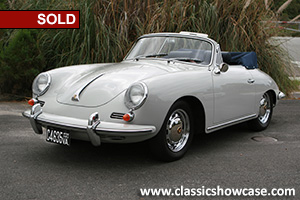 (SOLD) This is a spectacular fresh restoration by Porsche professionals to the highest level. No expense has been spared in this comprehensive nut and bolt restoration. This 356 C Cabriolet will make a great addition for the Porsche collector. During the restoration process this vehicle has been fit to perfection and repainted, color sanded and buffed, all systems gone through, instruments restored, new windshield, new shocks, suspension, hydraulics, fuels systems have been gone through, new wire loom, battery and tires. The interior has been completed re-trimmed in all proper German materials. There are no disappointments in this 356 C! You will be driving in comfort and class with your restored Blaupunkt AM/FM radio (which has been digitized for maximum enjoyment), and the original headrests. It is presented in its original colors and comes with a Kardex build sheet.

The Porsche 356 is an automobile which was produced by German company Porsche from 1948 to 1965. It was the company's first production automobile. Earlier cars designed by the company included the Volkswagen Beetle as well as Auto-Union and Cisitalia Grand Prix race cars. The 356 was a lightweight and nimble-handling rear-engine rear-wheel-drive 2-door sports car available in hardtop coupe and open configurations. Engineering innovations continued during the years of manufacture, contributing to its motorsports success and popularity. The Porsche sports car (of which the 356 was the first model) introduced the motoring public to a new standard in sports cars. Driving no longer meant choosing between comfort and performance. Porsche attached a smooth, quiet, well-spring, comfortable package to a powerful engine and agile steering. The 356 had a wind-cheating body with a compact - but not confining - interior layout. Over time the air-cooled engine was modified to a higher bore and stroke and a greater displacement, but the original Porsche design remained the same. Porsches became well known for their racing prowess, with both individual and factory cars participating in races like the LeMans 24-Hour Race and the Targa Florio in Sicily. But by 1965, the 356 had been in production with only minor changes for over ten years. The 1965 C Cabriolet is considered to be one the best and most refined 356 open cars in the entire 356 Class. The Porsche C models were well balanced, proportioned and well powered.