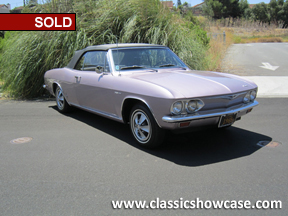 (SOLD) This beautiful Corvair Corsa has the factory upgraded turbocharged engine producing 180hp and features a rare and exciting Evening Orchard Poly paint color that was only produced in 1965. It underwent a cosmetic and mechanical, ground up, unibody restoration recently by Chevrolet professionals and has very limited miles since the restoration. It features “Recaro” style electric seats, deluxe hubcaps, heater, fuel filler guard, door edge guards, windshield washer, and an AM/FM cassette radio. The original owner’s manual will accompany the vehicle. This exceptional vehicle is a fun drive, offering a great opportunity to own a scarce air cooled performance engine vehicle and would make a great addition to any Corvair enthusiast’s collection.

The Chevrolet Corvair is a compact automobile produced by the Chevrolet division of General Motors for the 1960–1969 model years. The Corvair has the distinction of having been the only American-made, mass-produced passenger car to feature a rear-mounted air-cooled engine; The Corvair engine is an aluminum, horizontally opposed six-cylinder that produced 80 hp (60 kW) in 1960, but later versions produced as much as 180 hp (134 kW). .The Corvair, like the Ford Falcon and the Plymouth Valiant were entries of a new compact car class. The Corvair Monza, a five-passenger coupe with bucket seats was introduced late in the 1960 model year and found a new sporty-car niche. The Monza Spyder and later Corsa models were among the first American cars to offer a turbocharged engine.