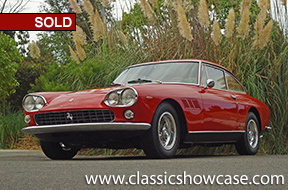 (SOLD) This is a beautiful, numbers-matching '65 Ferrari 330 GT 2+2 Coupe that has benefited from a show/driver level restoration by marque specialists at Classic Showcase of Oceanside, CA. The GT stands in excellent running and driving condition, and is primed and ready for the Spring/Summer touring and show circuit. This classic Ferrari has handsome Pininfarina styling throughout, and is powered by a 12 cylinder engine coupled with a 5 speed transmission. It features full instrumentation, quad headlights, and a very distinctive “egg-crate” grille. On the inside, the spacious Coupe has 4 leather seats, and a generous sized trunk which is ideal for traveling. During the restoration process, the GT was repainted, wet sanded and buffed, with all major mechanical systems and components being gone through and serviced as was needed. A new exhaust system was installed with the proper hangers and appropriate stickers, the Boroni wheels were fully restored and the brite work was re-plated as necessary. Master upholsterers at Classic Showcase fully reupholstered the Coupe's interior with luxurious leather seats, while the trunk compartment was fitted and bound with fresh, new carpet. A DVD documenting the entire restoration process by Classic Showcase will accompany the car. These particular Ferrari models have become highly collectible in recent years, so don't miss this opportunity to get a highly sought after and affordable investment-grade luxury sports car that is ready for driving, touring and showing today!

The 250 GT/E 2+2 was replaced in January, 1964 by the new 330 GT 2+2. It was much more than a re-engined 250, however, with a sharper nose and tail, quad headlights, and a wide grille. The wheelbase was 50 mm (2.0 in) longer, but Koni adjustable shock absorbers improved handling. A dual-circuit Dunlop braking system was used with discs all around, though it separated brakes front to back rather than diagonally as on modern systems. The 1965 Series II version featured a five-speed gearbox instead of the overdrive four-speed of the prior year. Other changes included the switch back to a dual-light instead of quad-light front clip, alloy wheels, and the addition of optional air conditioning and power steering. Prior to the introduction of the 'Series II' 330 GTs, a series of 124 'interim' cars were produced, with the 4-headlight external configuration of the Series I cars, but with the 5-speed transmission and 'suspended' foot pedals of the 'Series II' cars. The Chassis was similar to the 250 GT with coil springs and tubular shock absorbers at the front and a solid rear. The Pininfarina coachwork was a departure from Ferrari’s more exotic looks of the past but the car performed nonetheless. Introduced in 1964, the four-seater 330 was overall longer, wider, taller and more powerful than its 3.0 liter predecessor. This 1965 Ferrari 330 GT 2+2 Series II features a V12 engine with single overhead camshafts, Weber carburetors and 300 horsepower. There is a five-speed manual gearbox, four-wheel independent suspension, and four-wheel hydraulic disc brakes. The first series of the 330 GT 2+2 featured a four-headlight configuration, with smaller driving lights placed inboard of the headlights in a tapered fender recess. It is one of just 500 Series 1 four-headlight models.