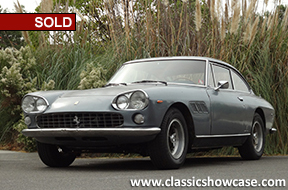 (SOLD) This Ferrari, chassis number 6405, was delivered new in Italy in 1964 through SEFAC in Modena, to its first owner. From new the car was fitted with the desirable and practical four speed with overdrive transmission. By August 1978, the Ferrari came to the U.S., and was one of many cars to pass through FAF Motorcars in Georgia. Some years later, the Coupe passed into a longer term ownership of more than 16 years. All told, the mileage on the car is a mere 43,000 kilometers or so, which is reflected best in its original and well preserved interior. During the most recent previous ownership, the car's engine bay was highly detailed and all mechanical work was performed as required. Prior to Classic Showcase acquiring the car, the Ferrari had been in the ownership of an experienced Ferrari technician since 1997, and as a result has received much mechanical attention over the last 15 years; while there is some rust on the car's undercarriage and lower rockers, the damage is easily fixable. In addition, the Borrani wheels and front/rear bumpers are easily restorable as well. Classic Showcase initially purchased the car because of its incredible originality and restoration potential, and has plans to take it to a show-level car. However, if desired, you may contract Classic Showcase to restore the vehicle to your wishes, and create the Ferrari 330 GT of your dreams! A DVD documenting the restoration will accompany the car, if a restoration is contracted. The car includes ownership and service documents dating back to 1979. Don't miss this chance to own a sought-after Ferrari model that is an excellent investment that you may drive now and take to a higher level when desired! Own your piece of Ferrari history today!

Introduced in January 1964, the 330GT 2+2 was based on the preceding 250GTE 2+2, Ferrari's first four-seater road car. Pininfarina was once again entrusted with the styling, adopting a four-headlamp frontal treatment that reflected the tastes of Ferrari's most important export market, the USA. Although some criticized its styling, the 'Series 1' four-headlight 330GT has become truly evocative of 1960s fashion, lauded both for its individuality and Pininfarina's purity of design. Like its predecessor, the 330GT employed a tubular chassis; the newcomer's though, was 50mm longer in the wheelbase, which made conditions less cramped for the rear passengers. Suspension was independent at the front by wishbones and coil springs while at the back there was a live axle/semi-elliptic set-up. Improvements to the discs-all-round braking system saw separate hydraulic circuits adopted front and rear. The 330's Colombo-type, 60-degree, V12 engine had first appeared in the 330 America (effectively a re-engined 250GTE 2+2) in 1963. Displacing 3,967cc, the two-cam all-alloy unit was good for 300-plus horsepower at 6,600rpm, an output sufficient to propel the 330GT to a maximum velocity of 152mph (245km/h) making it, when introduced, the fastest road-going Ferrari. Built alongside the ultra-exclusive Superamericas, the 330GT was Ferrari's ultimate grand tourer for the sophisticated client during the era known in Europe as 'la dolce vita'. A favorite of Enzo Ferrari, it was the first of his cars to sell in excess of 1,000 units.