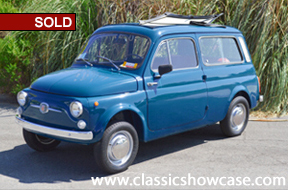 (SOLD) Designed by Dante Giacosa, this original and complete 1966 Fiat 500 Giardiniera has been very well maintained, serviced on a regular basis, and has been restored in the last year. It is sporty, fun, collectable and rare, and an economical car that would make a great addition to any Fiat collection, or for the first-time collector. It was purchased a few years ago when the owner was stationed in Italy. It has been rebuilt and repainted about a year ago. The engine has been upgraded to a 595 engine and the transmission is upgraded to a Fiat 126 Transmission which has synchronized gears for 2nd, 3rd and 4th gear. All the seals and gaskets where new when the car left Italy. There is a file of paperwork for the car from when it was in Italy, and even original documents from 1966 with a list of all the owners of the car (In Italian). Also included in the purchase are the license plates from Italy. The body is good, and the doors, hood, and trunk lid all fit well. The chrome and glass are also in very good condition, as well as the complete interior. Under the hood the Giardiniera is very complete and tidy, with a rebuilt engine, transmission, suspension and hydraulic system. It comes with the original jack, lug wrench and spare tire. The work that was performed is well documented, and all service records and information will be given to its lucky new owner!

Fiat model 500 belongs to micro car class. Measuring only 2.97 meters (9 feet 9 inches) long, and originally powered by an appropriately sized 479 cc two-cylinder, air-cooled engine, the 500 redefined the term "small car" and is considered one of the first city cars. The car was offered with 2-door fastback sedan, 3-door station wagon, fastback coupe body shapes between the years 1957 and 1975. A major change during a model run occurred in 1960, 1965, 1972. Cars were equipped with range of engines of 479 - 594 cc displacement, delivering 9.5 - 18.4 kW of power. Replacing the original Nuova, the new 500 series D was launched in the autumn of 1960. The D looks very similar, but there are two key differences. One is the engine size (the D features an uprated 499cc engine producing 17 bhp as standard, a top speed of 95 km/h and average consumption of 4.8 liters/100 km) and the other is the roof (the D roof does not fold back as far as the roof on the Nuova. The canvas roof was now sturdier, easier to open and slightly smaller). The D also features “suicide doors” and the white walls returned on the tires. A station wagon variation in 1960, the Giardiniera. The wheelbase was extended by four inches and the engine laid on its side, under a trap door in the rear floor. The rear door was side-hinged and the sunroof was full-length. The Fiat 500 was always a huge seller in Europe, with nearly 3.5 million in 18 years, but they were not sold in the U.S. after 1961, since a 9-foot 9 inch-long, 1,070-pound car with a 50 mph top speed was too frightening to contemplate on American roads. Genuine U.S. imports are easy to recognize since they had seven-inch headlights grafted onto the nose, replacing the five-inch European lights. Giardiniera’s are generally the next most sought-after 500.