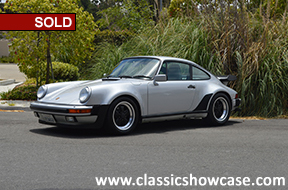 (SOLD) It is hard to find an original California 911 Turbo that has been unmolested. This example is very original, in its fabulous original color combination, featuring great factory options such as lumbar support for both driver and passenger, an alarm system, a sunroof, power windows, locks, speed cruise, and factory driving lights. This turbo coupe has had a recent documented service and runs and drives excellent, and has been well maintained. It has excellent door gaps and it is still retains the original Porsche door “ting”. The original sticker is still affixed inside the hood with the original equipment from the factory. Porsche Turbos are already highly collectible and sought after, but one in such great condition as this one is, is even more coveted. This car is complete with books, records, tools, and a warranty /service book that is stamped for prior service work. This beauty is sure to please your inner race car driver as you open the sunroof, let the sun shine in, and let those special days get a little more enjoyable with a fantastic ride along those scenic country drives. This is a car for the discerning collector who wants a good value and fun to drive Porsche.

The turbocharged version of the Porsche 911 is also known as the "Porsche 930 Turbo.". From 1975 to 1989, Porsche produced a turbocharged version of the 911, known by many as the 930 Turbo. The 1987 930 Turbo is one of the last classic 911 models produced, before the car was succeeded by the 964 Turbo versions. In 1987, the 911 was released in three models -- the base model coupe Carrera, the Targa and the Cabriolet. All models are rear-wheel drive vehicles with a steel monocoque body and chassis. In the 1987 models, the rear fog light was also integrated under the rear spoiler, which was previously located in the rear bumper on earlier models. All models are equipped with a power front-seat with cushion angle and height adjusters and backrest-angle movement. Additional standard features included air conditioning, a premium audio system with cassette capability, leather seats, a leather-trimmed four-spoke steering wheel and a central locking system.