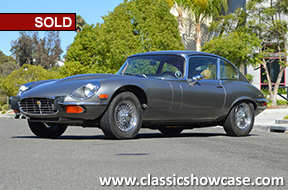 (SOLD) This very original San Diego V12 2+2 has a California title, and has been restored by a prominent Jaguar restorer. It comes complete with a 4 speed, A/C, and a JVC AM/FM stereo with cassette deck. It was part of a collection, and shown in several JCNA sanctioned shows. The interior was trimmed with an interior kit from BAS with all the correct materials and professionally installed. This beauty was treated to a bare metal respray, with all systems gone through or replaced, including a new suspension, exhaust system, new tires & wheels, battery, and all new rubber, etc. The front over riders were changed to smaller versions (as seen on 1972 V12 models), to achieve a sleeker look and feel. The car includes with a spare tire, jack, hammer and tool roll. This is an excellent driver in a fabulous color combination.

The Jaguar V-12 was advertised as 'The E-Type With a Difference.' The Jaguar V-12 engine was introduced into production for 1971 and was discontinued in 1976. The V-12 was only the second engine Jaguar designed to go into production in the history of the company. The original 5.3-liter engine had an over square 90mm bore by 70mm stroke producing 285 horsepower. This Series 3 example is one of the 7,300 E-Types known as the '2+2', a four-passenger version of the coupe with a slightly lengthened wheelbase that was first introduced in 1966. The original, beautifully sleek semi-monocoque body was the work of Malcolm Sayer, one of the first engineers to apply the principles of aerodynamics to automotive design. The Series 3, produced from 1971 until 1974, had to be modified to conform to increasingly stringent safety standards. It can be identified by the large cross-slatted front grille and flared wheel arches. Powered by a 326 cubic-inch V-12 engine with 'massive torque and incredible acceleration,' its top speed is somewhere around 150 miles per hour. The engine is supported by a square tube frame structure fused to the firewall of the monocoque shell. It features four-wheel independent suspension with two coil springs in front and four in back, rack-and-pinion steering, and four-wheel power-assisted disc brakes. Ever since its first appearance, the Jaguar E-Type has been instantly identifiable, all over the World, by its distinctive and highly individual styling and has become one of Britain's most successful exports. 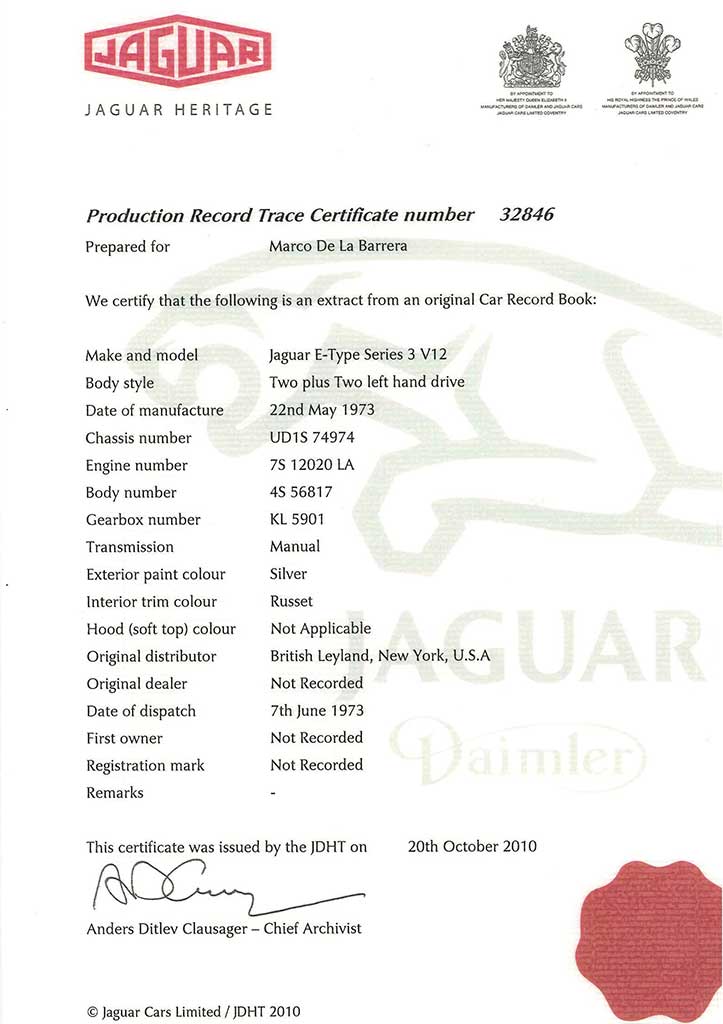