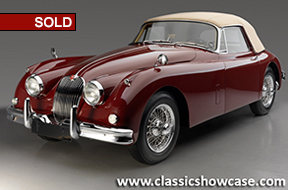 (SOLD) This XK-150 received a spectacular, no-expense spared restoration done by Jaguar professionals in one of the finest shops in the United States. It has only been campaigned and shown since 2011, where it received three 100 point scores, and became a JCNA national champion. In 2012, it has been shown in two JCNA sanctioned shows, and scored 100 points in each!

The Jaguar XK150 is a sports car produced by Jaguar between 1957 and 1961. It replaced the XK140. Initially it was available in Fixed Head Coupé (FHC) and Drophead Coupé (DHC) versions. The Roadster (XK150 OTS - Open Two-Seat) was launched in 1958. Minimal rear seats were fitted in the coupés. lthough bearing a family resemblance to the XK120 and XK140, the XK150 was radically revised. A one-piece windscreen replaced the split screen, and the wing line no longer dropped so deeply at the doors. The widened bonnet opened down to the wings, and on the Roadster the bulkhead was moved back 4 inches (102 mm) to make the bonnet longer. The car was available at various times in Red, Pearl Grey, White, Indigo Blue, Claret, Cotswold Blue, Black, Mist Grey, Sherwood Green, Carmen Red, British Racing Green, Cornish Grey, and Imperial Maroon. The XK140's walnut dashboard was replaced by one trimmed in leather. On the early Drophead Coupés, the aluminium centre dash panel, which was discontinued after June 1958, had an X pattern engraving similar to the early 3.8 E-type. Thinner doors gave more interior space. On the front parking lights, which were located atop the wings (fenders), a little red light reminded the driver the lights were on. The standard engine, the same as fitted to the XK140, was the 3.4 litre DOHC Jaguar straight-6 rated at 180 SAE bhp at 5750 rpm but most cars were fitted with the SE engine whose modified cylinder head and larger exhaust valves boosted the power to 210 SAE bhp at 5500 rpm. Twin 1.75-inch (44 mm) SU HD6 carburettors were fitted. While the first XK150 were slower than their predecessors, the deficit was corrected in the spring of 1958 with a 3.4-litre "S" engine with three 2-inch (51 mm) SU HD8 carburettors and a straight-ported cylinder to give a claimed 250 SAE bhp. For 1960, Jaguar bored the 3.4 litre engine to 3.8 litres, rating this option at 220 hp (164 kW; 223 PS) in standard tune or 265 hp (198 kW; 269 PS) in "S" form. A 3.8 litre 150S could top 135 mph (217 km/h) and go from 0–60 mph in around 7.0 seconds, thus restoring whatever verve the XK had been missing. Fuel economy was 18mpg. Four-wheel Dunlop 12 in (305 mm) disc brakes appeared for the first time although it was theoretically possible to order a car with drums. Either wire wheels or disc wheels could be specified. Suspension and chassis were very similar to the XK140. Steering was by rack and pinion; power steering was not offered. Production ended in October 1960, and totaled 2265 Roadsters, 4445 Fixed Head Coupés and 2672 Drophead Coupés. 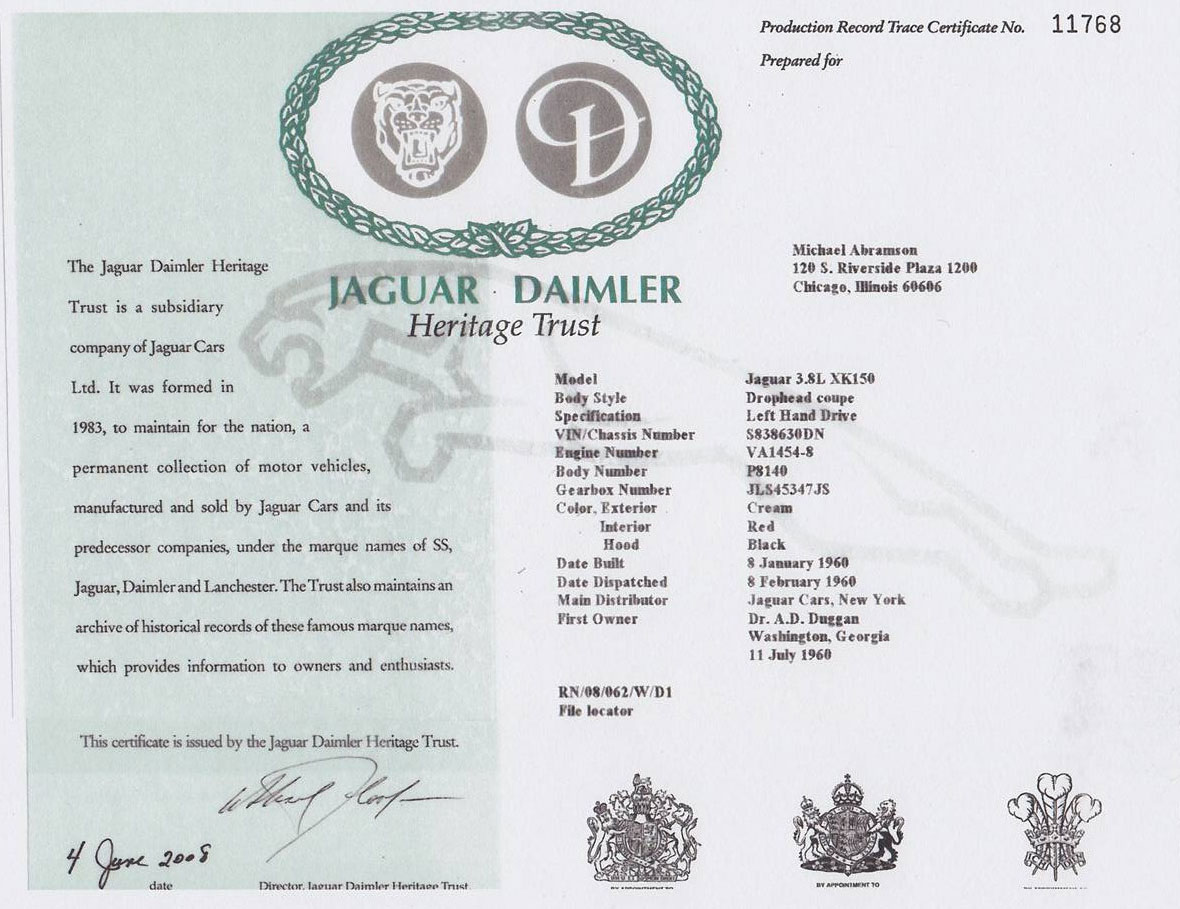