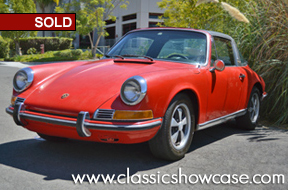 (SOLD) This very original 1969 Porsche 911 E Targa is dressed in Tangerine with a Black interior. It was completed on November 3, 1968 making it an early 1969 model. It is a great candidate for a Classic Showcase restoration done to either a Show/Driver or Show level. Please see our restoration page for further information. Included in the restoration process, the vehicle will be stripped to bare metal, placed on a rotisserie, metal finished, leaded, all body parts fitted to the car and chrome, prepared for primer, sealer, paint, base, clear, color sanded and buffed to a fabulous finish. The car will not be painted for a while, so we can paint it the color of your choice. All systems will be gone through and the engine will be rebuilt back to factory specifications. The fuel, electrical, cooling, and hydraulic systems will be restored. All components will be rebuilt back to factory specifications, including the engine, transmission, rear end and suspension. All chrome will be re-plated as needed. The car will receive a complete new custom tailored and fit interior in the correct materials by our upholstery department. A DVD of the restoration process will accompany the vehicle. It comes with its correct Fuchs Alloy wheels and its Porsche Certificate of Authenticity. For the Porsche enthusiast, this is a great opportunity to have a very collectible Porsche done to your own specifications.

1969 brought the first substantive changes to the Porsche 911 lineup which now consisted of three models, the 911T, 911E and 911S all of which were available in coupe and Targa body styles. The E and S were mechanically fuel injected. For 1969, Porsche stretched the wheelbase and flared the wheel arches allowing wider tires to be fitted. Unlike most performance cars of the era, horsepower kept climbing through the use of fuel injection and a series of 200 cc displacement increases. The E had a bit more horsepower and more luxury features. The 911E was designed to be the more comfortable, more drivable model of 911 – fitting between the tamer 911T (Touring) and the high-performance type 911S (Super). The 911 E's designation derives from the German word for injection: einspritzung. The mechanical fuel injection "MFI" system used on the 911E (and 911S) was jointly-developed by Bosch and Porsche. It is similar to the injection system used in the Carrera 6 of 1966. In addition to more precise control of the fuel-air mixture and equality of distribution among the cylinders (compared to carburetors), the MFI contributed toward meeting the nascent emissions control regulations of the time. The 1969 types 911E and 911S also featured a new high-voltage capacitor ignition system that addressed the spark plug fouling problems experienced in earlier 911’s. Another signature feature of the 911E is the self-adjusting hydro pneumatic front suspension struts. Developed by Boge, the struts combined the functions of springs, shock absorbers, and antiroll bars – while also automatically adjusting the height of the front of the car to compensate for weight in the trunk. These struts were standard equipment on 911E models from 1969 through 1971. Intended as the luxury model, the 911E came standard (in most markets) with the "comfort" package of features: including ventilated brake discs with aluminum calipers, velour carpeting, a leather-covered steering wheel, heavy bumper rub strips and rubber guard inserts, chrome rocker-panel trim, and gold-colored script on the rear Deck. In 1969 they only built 858 Targas. 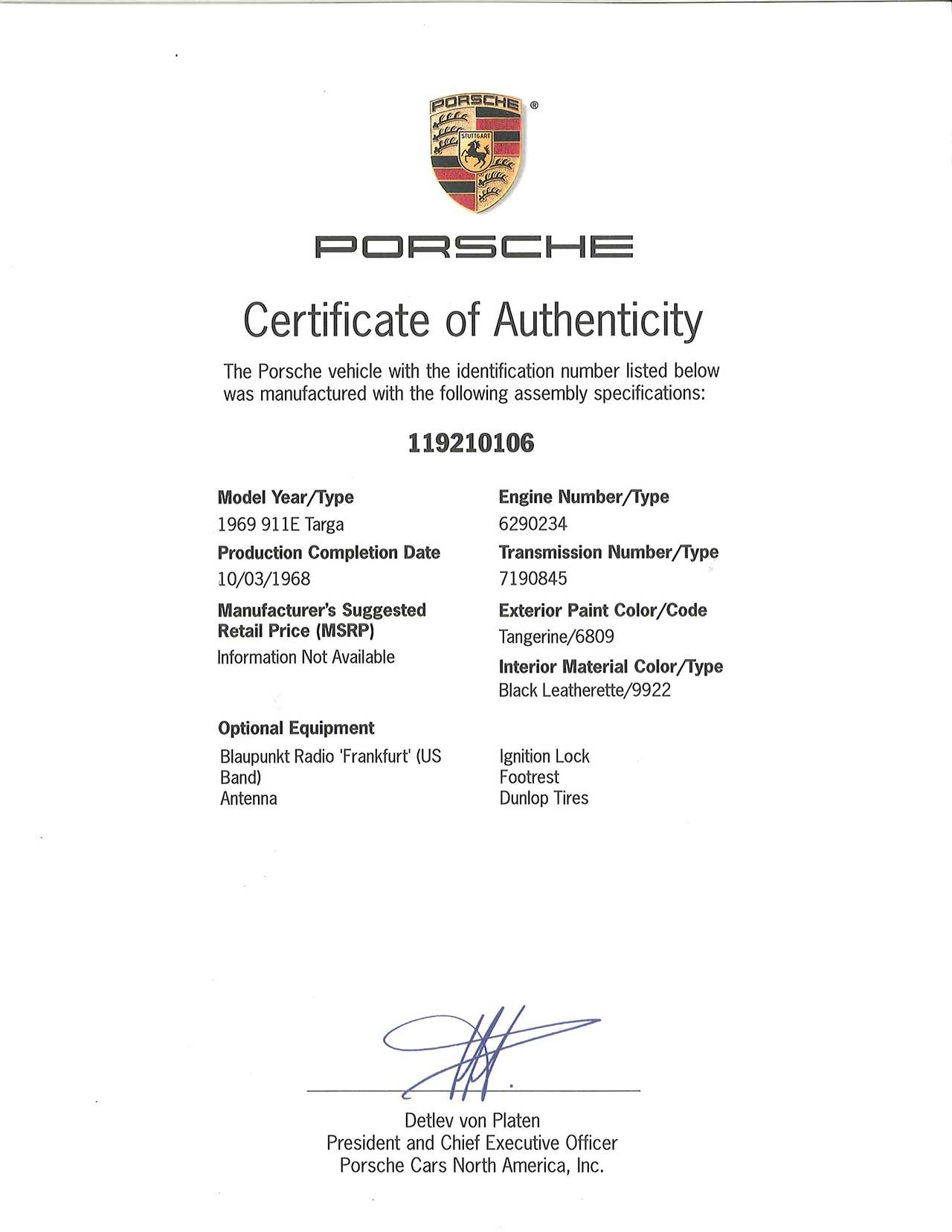