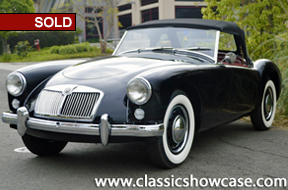 (SOLD) This MGA Roadster was a very solid and original car when we purchased the car from its 30+ year owner. It has been sitting for several years in a project condition in a Southern CA garage so we decided it deserved to be taken back to its former showroom glory. It was a great candidate for restoration as it was rust free and straight as an arrow. The car also has removable windows on the doors that were restored, ore replaced, and will accompany the car. These removable windows came standard in this model. Included in the show/driver level restoration process, the vehicle was stripped to bare metal, metal finished, leaded, all body parts fitted to the car and chrome, prepared for primer, sealer, paint, base, clear, color sanded and buffed to a fabulous finish. All parts were painted off the car individually. All systems were gone through and the engine was rebuilt back to factory specifications. The fuel, electrical, cooling, and hydraulic systems were all restored, or replaced as needed. All components were rebuilt back to factory specification including the engine, transmission, rear end and suspension. All britework was re-plated as needed. The MGA received a complete new proper and was installed by our master upholsterers. A DVD of the restoration process will accompany the vehicle. This MGA is a great example to show, drive and enjoy! You will probably not be able to find a nicer one anywhere.

The MGA began production in 1955. The styling and mechanics were different from previous MG models. The public had been given hints of its new design during the 1951 Le-Mans 24 hour endurance race. The car was driven by George Phillips and was actually a TD Midget with body modifications. The styling of the car was undeniably elegant. Its aerodynamic design and two-seat open-body was stylish and sporty.