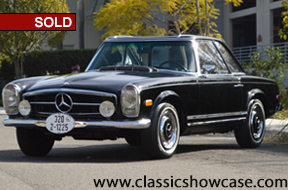 (SOLD) Assembled at the Mercedes-Benz factory in Stuttgart, Germany, during the summer of 1969, this fine 280SL left the factory on July 18 that year. As new, it was finished in DB568 Signal Red, with matching hard top, and trimmed with a black MB Tex interior. The 280SL was equipped for the home market, and found its first owner in the Duisburg area, in Germany's Ruhr region. The car's early history remains unknown, but at some point the Mercedes-Benz migrated to the United States, where it has remained since. The 280SL's exterior was finished in the current black, and it is apparent that many mechanical and cosmetic refurbishments have been performed over the years. It should be noted that the car's engine number does not match the one listed on the factory built records, and suggests that another unit has been installed. Displaying good panel gaps, this 280SL has that outstanding quality feel so indicative of the marque. Complete with hardtop, Becker radio, books, tools and copies of the factory build sheets, this fine example of the legendary Pagoda-top 280SL is ready for its next caretaker. Please note that this vehicle is titled as a 1970.

Every decade has its style icons. The 1960s brought us go-go boots, bouffant hairdos, and kipper ties, but none have aged nearly as well as the Mercedes-Benz W113 Series Roadsters. The W113 was the original “car as accessory.” It was expensive and impractical enough to demonstrate one’s wealth, but it was also small and zippy enough for easy motoring through city traffic. It was sporty enough to be fast and fun to drive, and it was also comfortable enough to be luxurious. The W113 was always appropriate for any occasion, and anyone looked good in it. The original W113 design was the 230 SL. It was introduced in 1963 with the crisp, angular Paul Bracq styling and the “pagoda” removable hardtop, which would become the model’s signature. The original 150-horsepower six-cylinder grew in size over the decade, with the ultimate model being the 280 SL with the 180-horsepower, 2.8-liter engine, which was introduced in 1968 and built through to 1971. The 280 SL was the most popular W113, as it accounted for 23,885 cars.