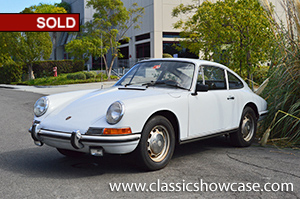 (SOLD) This 1967 911S SWB Coupe was acquired in 1986 from its first owner and had been in the loving care of its last owner for over 28 years. He loved the car and enjoyed driving it in the summer months with his lovely wife. In the winter of 1989 his twins were born so that summer he wasn't able to drive the car at all as the kids were very small and he did not have any occasion to take them for a ride yet. Year after year he wasn't able to drive the car due to the fact it had been sitting for a few years and he wanted to have a mechanic check it out before putting on the road again, and the closest Porsche mechanic was about 100 miles away. The Porsche spent most of the last 24 years in an enclosed, heated barn. Today this is an extremely rare and collectible Porsche that was completed on June 9, 1967. It came from the factory with Halogen fog lights, a Blaupunkt “New York” radio, loudspeakers, and antenna. This rare and collectible Porsche comes complete with the Porsche Certificate of Authenticity and is a numbers matching car. It is one you will want to add to your collection and is able to be restored to your own wishes and desires.

For 1967, a new 911S high-performance coupe was introduced. While the base model had a 9.0:1 compression ratio, the 911S version had a compression ratio of 9.8:1 and twin three-barrel carburetors. The 2.0-liter flat six offered 180 horsepower, an increase of 32 HP over the base model. The 911 sold for $5,990 while the 911S was an additional $1,000. Both versions had a five-speed manual gearbox, a rack-and-pinion steering, steel monocoque construction, and disc brakes. The 911 had a top speed of about 130 mph while the 911S could achieve 140 MPH. In 1967 Porsche created the 'Sports Purpose Program.' The idea was to make available to private Porsche customers specially prepared cars and parts for racing the fledgling 911. These cars were used in Europe for rallying and in the United States for road racing where they were often referred to as Trans Am cars. In 1966 the 911 S was introduced as a better equipped and more powerful version of the standard 911. It featured engine modifications that resulted in 30 extra horsepower. The chassis was modified and bigger brakes were installed. An extra 5 pounds was saved from each corner of the car by using Fuch alloy wheels.