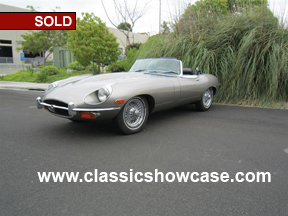 (SOLD) This XKE was purchased from a long time Jaguar owner and with its low original mileage and originality it was a good candidate and very deserving of a restoration. During the restoration process by Classic Showcase, the car received a complete repaint, wet sand and buff. The interior was freshened up with new vinyl and leather where needed. The original Stromberg carburetors were rebuilt and the radiator was restored. A new master cylinder and new slave cylinder were installed along with a new stainless steel exhaust system. All systems were serviced such as the hydraulic system, fuel system and cooling system. New hoses, rubber and hardware were installed as needed. As a finishing touch, Classic Showcase completed a full vehicle detail, major tune up and full service. This XKE is now ready to drive, enjoy and compete in your favorite Concours.

While the Series II E-type was more radically altered than its interim predecessor, the essential construction remained the same and the body work differed only in detail. Modifications were made to the front of the bonnet, increasing the size considerably, the headlamp scoops were altered so that the inner walls now splayed inwards and the side/flasher were rather larger and positioned below the raised bumper. The vehicle also received heavier front bumper blades, motif bar, front and rear over riders were changed, new square number plate at the rear, a different grille was used in the rear of the bonnet bulge, and the washer jets were finished in satin chrome to avoid the risk of dangerous reflections. Reclining seats were fitted to the Series II cars as well as head rests that were adjustable for height. 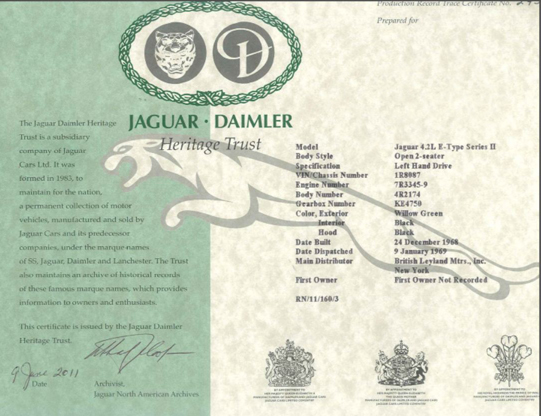