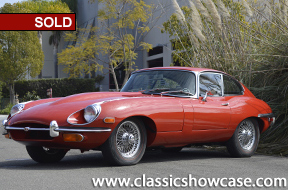 (SOLD) This 1969 Jaguar E-Type Coupe has had documented limited long term ownership, and has benefited from a recent full servicing, along with the addition of numerous new parts and hardware; included in the list: a new set of Vredestein tires, anti-roll bar link bushings, safety washers, frame bolts, lower ball joint boots, vacuum hose, and splash panel. In addition, the XKE's rear end has been removed and reinstalled, and the emergency brake pads were replaced. The XKE's I.R.S. and A Arm mounts were replaced, and a front and rear alignment was performed. The car currently stands in wonderful running and driving condition, and is ready for the road! The current owner has had the XKE for over 8 years, and during that time performed major servicing and other restorative work, including the addition of a new 5-speed transmission for better performance and handling for freeway driving. When the well-known Jaguar specialists were preparing to install the 5-speed, they did a complete review of all components and decided to install a new clutch/flywheel, drive shaft and u-joints, rebuilt the suspension, added an alloy radiator, rebuilt most of the engine - upper and lower, and performed miscellaneous electrical work. The E-Type retains it's original Philips AM/FM/SW radio, as well as it's tool kit, jack and knock off hammer. The steering wheel was changed to a smaller Mota-Lita unit, but the original wheel will accompany the car upon purchase, as well as a car cover. Also included with the Roadster is a DVD of the work done by the Jaguar professionals, along with a large book of receipts from the previous work that was performed. The E-Type has limited miles since the rebuild and work was performed. With it's recent full service being performed to this very original XKE, the car stands ready to fulfill all of your driving pleasures.