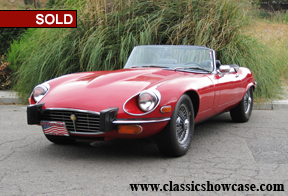 (SOLD) This 1973 Jaguar Series III has a great patina of originality. It has been properly serviced and maintained locally and is in good original condition. This car features factory A/C, Sony AM/FM stereo with cassette, 4 speed transmission, chrome wire wheels and low original miles. The exterior color of the car was changed from its original green to a sporty red about 20 years ago. This is a good solid driver, but does have a bit of corrosion under the driver side rocker panel, which is an easy repair. Running very cool, this would be a great car to drive and enjoy and a great candidate to restore to the next level.

Last of the E-types the series III V-12, a big, relaxed, high-torque engine was the way to go and Jaguar had a solution under development. It was an all-aluminum, single overhead-cam V-12, destined for the XJ sedan but also capable of giving the aging sports car the marketing boost it needed. With the 5.3 liter V-12 up front, the Series III E-type was announced in March 1971. Physical changes to the car were surprisingly few. Most important was the use of the long wheelbase on the roadster as well as the 2+2, allowing automatic transmission to be offered on the open car for the first time. There was no back seat in the roadster. The pretty two-seater coupe was dropped. The track was increased by 4.25 inches and the fender openings had pronounced flares to accommodate the increase and the wider wheels and tires fitted. Again, the Turbo disc wheels were standard but painted. Chrome-plated wheels were extra. Wire wheels were still available. An aggressive chrome grille, first ever on an E-type, filled the air intake and new air scoop for additional cooling sat just below the grille. Fitting the V-12 made it necessary to redesign the front sub-frame and suspension but torsion bars were retained. The V-12 Series III holds its value extremely well and compares closely to the Series I in collector demand. This Jaguar features California blue plates.