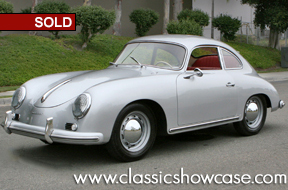 (SOLD) This rare and collectible Porsche 356 A coupe has recently benefitted from a restoration by Porsche specialists, Classic Showcase of Oceanside, CA. With only 30,015 original miles on the odometer, this beauty is a very sought after example, with a numbers matching motor and transmission, it has been registered with the 356 registry, and it has the special Reutter Coachwork. During the restoration process, Classic Showcase disassembled and documented the vehicle, the body was stripped, it was body worked and fit, all parts were fit to the car in bare metal; it was primered, sealed, painted base coat/clear coat, all parts were painted off the car individually, then it was color sanded and buffed, and the systems were restored, or replaced, as needed. The sheet metal and the engine compartment have also been restored, as well as the undercarriage. Sound deadening was installed prior to having the interior fit by their master upholsters. The interior is trimmed in all the proper German materials and it even features the Porsche radio blanking plate. The bright work was replated as needed. This is a very nice example of a highly collectible model that was restored in a desirable color combination, with a lot of attention to detail.

Despite looking outwardly similar to the preceding models, Porsche thoroughly updated their 356 line in 1956 and called their new model the 356A. At the core, this included a larger 1600 cc engine, but also a curved-glass windshield and a thoroughly revised suspension. At the 1955 Frankfurt Motor Show in September of 1955, Porsche released the 356A/1600 to the world with cabriolet, coupe and speedster bodies from Reutter. These were updated to better suit the improved gasoline and tire technologies of the period. With the 356A came a larger 1582 cc engine that had higher compression to take advantage of the available higher octane fuels. A Type 616/2 Super engine was offered as an option with raised power. Extensive testing by the experimental department known as Versuchsabteilung resulted in numerous suspension and drive line mounting changes before the final 356A specification was decided. They softened the springs by removing leaves from the torsion cars and fitted stiffer dampers. This was done to take advantage of a more modern tire technology which allowed for a smaller-diameter 15-inch tire and a wider tread with reduced air pressures. From the outside, the 356A kept to the Porsche mantra of stepwise evolution. The new model was outwardly identical to the previous version except for the wider tires, a small rub-strip below the doors, a fully-curved front window and enamel paint replacing lacquer previously used. Inside, Porsche fitted an all-new, flat-face dashboard that was sculpted around the new curved windshield. It included a padded-top, locking glove box and a provision for a modern radio. Other interior appointments included a headlight flasher, automatic interior lighting, self-cancelling signal switches and, most importantly, a lower floor. Popular options were a steering-wheel lock and a clock. At the 1957 Frankfurt Motor Show Porsche released the T2 body style with exhaust routing through the rear bumper over-riders. More importantly, the T2 cars stopped using the roller-bearing crankshafts and the Hirth crankshaft in the Super models. Other changes included changing the carburation from Solex to Zenith 32 NDIX.