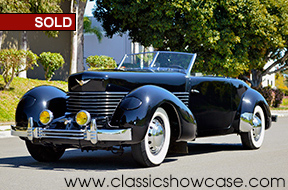 (SOLD) This very rare and original Cord Phaeton convertible has a lovely air of patina throughout. It has resided in a museum collection for many years and is eligible to become part of the ACD Club. It has had a recent service, and is being made road worthy currently. This Cord is a very solid, and presentable car as it stands. It comes with the sleek sensational coffin-nose styling, a 4-speed electrically-selected semi-automatic transmission, cranks below dash for raising headlights, fog lights, chromed stone guards on rear fenders, chromed full wheel covers with wide whitewall tires and an engine-turned instrument panel with 120 MPH speedometer, fuel, temperature, oil, amp gauges, tach and clock. The Phaeton was originally conceived by Duesenberg president Harold T. Ames as a new baby Duesenberg. This would be a great car for someone who is looking to add a very sought after Cord to their collection. It can be kept as is with the originality preserved, or restored to its former showroom days and made a great show contender.

The design for the Cord 812, in only slightly different form, came from the drafting table of Gordon M. Buehrig. It was originally submitted to GM's legendary head of design Harley Earl, who rejected the car as too radical. Errett Lobban Cord, who'd revived the fortunes of the ailing Auburn Automobile Company with the thought that more was better, thought it was just the thing -- to the degree that the car, when it was put into production, bore his name. At the November, 1935 New York Auto Show, the Cord name was on everyone's lips, and orders for the car poured in faster than Cord could fill them, to the extent that many frustrated customers cancelled their orders. The 812's feature technology that put them decades ahead of their time. For example, they were among the first cars anywhere to feature front-wheel drive, contributing to a lower-slung design and handling that would've been the envy of many another carmaker. And the car's rakish Art Deco lines were further enhanced by then-innovative hidden door hinges, rear hinged hood, variable speed wipers (at a time when the few cars that had wipers usually required them to be hand-cranked), and pontoon fenders with retractable headlights, which wouldn't appear again on production cars stateside 'til the 1960's. Fittingly, the sleek car was powered by a supercharged 125 hp 4,739 cc (289 cu in) V8 engine built by Lycoming, who would later become known for their aircraft engines. The transmission is a semi-automatic four speed (three plus overdrive). Built by Schwitzer-Cummins, the blower ran at 24,000 rpm to raise maximum output by a full 45 horsepower to 170, a smashing 36 percent gain. Autocar magazine in England timed a supercharged 812 sedan at just 13.2 seconds in the 0-60 mph test, a full seven seconds faster than it’s normally aspirated counterpart. There were a total of 610 Phaeton cars created and less than 200 were supercharged. The Cord Model 812 succeeded the model 810 in 1937. Several options were made available in 1937 including a super-charger and a long wheelbase 'custom' series. The super-charged model had the external exhaust pipes, and utilized a super-charged Lycoming V8 engine. Radical for its day, the Cord 812 had retractable headlights, hidden door hinges, no running boards, stepdown floor and independent suspension. About 90 convertible coupes were built and only a handful of those were supercharged. The Cord is a front wheel drive vehicle and has pre-select shifting with Vacuum/solenoid assisted Transmission. Another feature was the disappearing headlights. As it declared in a November 1936 Cord advertisement: "Auburn knows that the market for a distinctive, ahead-of-the-times type of car is smaller than the market for ordinary cars. Auburn dares to forsake beaten paths -- dares to depart from the conventional -- dares to take leadership." Perhaps the most fitting tribute ever paid the Cord 810/812 came from New York City's Museum of Modern Art, which staged a special exhibit in 1951, simply titled "Eight Automobiles." Included were a 1941 Lincoln Continental, a 1937 Talbot-Lago, the Pinin Farina-designed 1946 Cisitalia, a 1938 Bentley, a World War II military Jeep -- and a 1937 Cord 812. Declared MOMA curator Arthur Drexler: "We regard the Cord as the outstanding American contribution to automobile design."