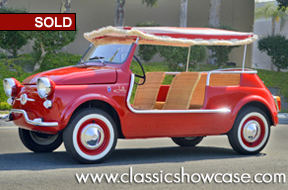 (SOLD) This stunning Fiat Jolly is one of 100 likely survivors in existence, and is particularly attractive in it's finish of Fire Engine Red over a Tan wicker interior. The Jolly features a Ghia body design, and is a highly collectible and rare car that was often used in resort and beach settings as it provided a fun and versatile driving experience while capturing smiles from everyone nearby. Many of these models were custom made to order creations that often found there way to coastal resorts around the world, including Monaco and Cannes. Numerous celebrities and public figures have owned Jollys, including Aristotle Onassis, Yul Brenner, John Wayne, Grace Kelly, Mae West, along with U.S. President Lyndon Johnson, who used his Jolly on his Texas ranch. Without a doubt, the Jolly presented here is a perfect and unique choice for your collection, or to simply drive and enjoy at your favorite resort or coastal area.

Fiat’s long-running 500 Topolino gave way to a new 600 model in 1955. The new car, named for its nominal displacement, had a 633-cubic centimeter overhead-valve, water-cooled inline four, which provided a useful increase in power over the two-cylinder 500. It featured unibody construction for lightweight rigidity and had four-wheel independent suspension, on the same 2,000-millimeter wheelbase as the 500. Due to its “just right” size and performance, the 600 was immediately popular and remained in production for 15 years, with more than 2.5 million built. During that time, there were several variants, with the most charismatic undoubtedly being the 600 Jolly. The father of the Jolly was Fiat’s chairman Gianni Agnelli, who wanted a small car to carry aboard his 82-foot ketch, the Agneta, during port stops in the Mediterranean Sea. As it was small and light, it could easily be lowered over the side for local transportation. The first Jollys, which were intended for the resort trade, were built on the two-cylinder Fiat 500 platform and then modified by the Italian coachbuilder Ghia. This involved removing the roof and doors and adding wicker seats and a fringed surrey top. A version based on the larger 600 soon followed. Production estimates vary, but probably no more than 400 were built, of all types, between 1958 and 1969. They were briefly sold in the United States and remain rare here.