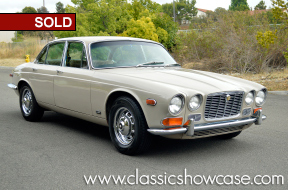 (SOLD) This Series I XJ6 sedan is a lovely, very original California car that has been well preserved, has always been garage kept, and has had limited ownership. It was owned by the same owner from 1973 up until the last few years when the last owner purchased it. It still retains its California blue license plate and is in its original color combination of Fawn and Biscuit. The car shows lots of patina and is a great candidate for a high level restoration, or to drive and enjoy as is. The interior is all original, save the headliner which was replaced, and the rear seats are in great condition as they have likely never been sat in. Mechanically the car has been extremely well maintained, with the following recent work being performed: new ball joints, rotors and calipers installed; the bumpers were rechromed, the windshield gaskets were replaced, a new Pertronix Ignition was installed, new 7 Inch headlights added, new fuel pumps (Both tanks work), new tires installed, and the A/C was updated to a Sanden compressor. There are beautiful lines and great features with the series I, which is very sought after by the Jaguar collectors. It features its correct Philips AM/FM push button radio, power steering, power windows, A/C, and power brakes. It includes its original owner’s manuals, warranty book with stamped plate, and wiring diagram, etc. Here is your opportunity to buy a great running and driving XJ6 and improve the car aesthetically to your liking as you wish.

This is the first variant (Series 1) of the XJ6 produced from 1968 to the present time. Listed in the September 06 issue of Automobile Magazine as one of the 25 most beautiful cars ever! This was the last Jaguar model fully designed by Sir William Lyons, founder of Jaguar. In 1968, the XJ was the designation given to a series of elegant flagship, full-size luxury saloons which were also the last Jaguars to have the design direction of company founder Sir William Lyons. Interestingly a year later, upscale Daimler versions were also offered called the Sovereign. Power came from a DOHC 4.2 L straight six. It also featured power steering, leather upholstery and optional air conditioning. The XJ also broke new ground mechanically for saloons with its rear independent suspension and Jaguar's first foray into rack-and-pinion steering. The first 'Mark' was introduced in 1968 and continued until 1992. During this time there were three series, Series 1, Series 2, and Series 3. From 1968 through 1973, Jaguar produced 82,126 examples of the XJ Series I. Additionally, the XJ inherited from the Mark X the twin fuel tanks positioned on each side of the boot, or trunk as we call it, and filled using two separate filler caps. This car features the optional air conditioning, four wheel disc brakes and boasts a top speed of 120 MPH.