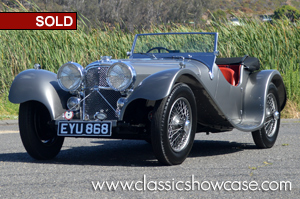 (SOLD) This right hand drive 1938 Jaguar SS100 has come from a collection of a single owner who had it for more than 40 years. It was delivered dressed in Gunmetal Grey with a red leather interior. It has a London license plate of EYU 868, which it still retains today. The car has been in the USA for at least 50 years. The SS received an upgraded replacement engine which is a post-war 3½ Liter unit.

Classic Showcase has scheduled to perform a comprehensive Show-level restoration to this rare 1938 Jaguar SS 100. Included in the restoration process, the vehicle will be completely dissembled, and the interior and all components will be removed and documented. The vehicle body will be stripped to bare metal, worked, the metal finished, fitted, and leaded as needed, and all body parts and chrome will be fitted to the car; It will be primed, sealed, have a base and clear coat applied in its original color combination, and be color sanded and buffed to a beautiful finish. All systems will be gone through, and will be restored, or replaced as necessary. The transmission, clutch, and hydraulic systems will be fully restored, and the car will receive all new rubber, grommets and seals. In addition, the britework will be re-plated as needed. The car will receive all new fitted upholstery, and will be fitted in the correct materials by master upholsterers in our Upholstery Department. The roadster's parts and components will be restored in the proper colors and finishes, and we will be using NOS parts wherever possible. Extreme attention to detail will be given because of the importance of this early, highly original SS100 Roadster. A DVD of the restoration process, along with a Heritage Certificate of Authenticity will accompany the vehicle. This SS100 is a rare and truly amazing 1930’s time capsule that will undoubtedly cause a sensation once its comprehensive restoration has been completed.

Launched in 1936 alongside the 2½-Liter saloon, the SS100 Jaguar sports car marked the company's first use of the 'Jaguar' name. Beautifully styled in the manner of its SS90 predecessor, the newcomer employed a shorter, 102"-wheelbase chassis and a revised version of the 2,663 cc Standard Six which, equipped with Weslake's overhead-valve cylinder head and breathing through twin SU carburetors, now produced 104 bhp. In 1938 a 3½-liter version producing 125 bhp was added to the range, the larger engine's extra power making the SS100 a genuine 100 mph car. Although a fine touring car, the SS100 was marketed primarily as competition work. Its first major success came early, if somewhat unexpectedly, when Tommy Wisdom, crewed by his wife, won the arduous International Alpine Trial in 1936, beating Bugatti and bringing the fledgling marque to the attention of the Continental public. This would be the first of many successful rallying forays, including class wins in the RAC events of 1937 and 1938, and the Alpine (outright) again in 1948. Around 198 2½-Liters and 116 of the later 3½-Liter cars had been made by the time SS100 production was prematurely ended by the outbreak of war. 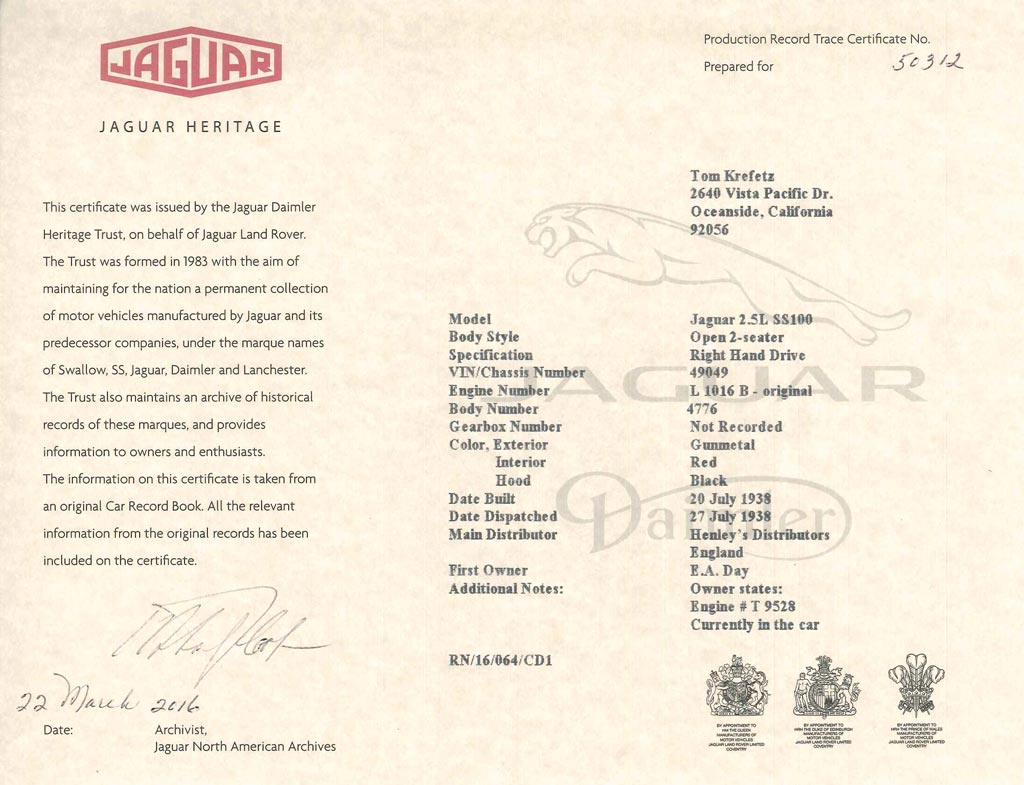