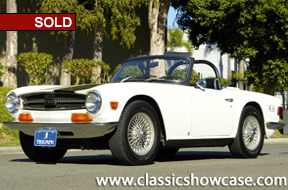 (SOLD) This two owner, matching numbers TR6 Roadster has been lovingly cared for and always well maintained by a local British car specialist. In 2012 it had major service work performed which included items such as: body work and repaint in OEM Wimbledon White, a new interior and convertible top were installed, new tires & brakes added, rebuilt carbs, new master cylinder and clutch slave cylinder installed, new fuel lines and fuel pump installed, converted the original ignition system to electronic ignition, added a new battery, rebuilt the rear end, and replaced the left side rear trailing arm. There was a lot of other work done in 2012 as well, which we have receipts and records for. It was recently serviced by a local British shop that did a lot of the mechanical restorative work, and it has been driven less than 1,000 miles since all of the above work was completed. This car was one of the last TR6’ s built in August of 1972, according to its VIN#, but is titled as a 1973. She is clean, fresh, and reliable, and a lot of fun to drive. This could be your next daily driver, or you could easily take her to the next level, and make her a show winner.

The Triumph TR6 was introduced in 1969 as a replacement for the TR5/TR250. The TR6 featured similar running gear components and chassis as its predecessor but incorporated new external styling. The updated styling, courtesy of Karmann of Germany, allowed for more cargo capacity in the rear of the vehicle when compared with previous models. The doors and the center section remained unchanged from the TR4 and TR5 models. The interior comfort and drivability of the TR6 made it a highly successful British sports car. It was similar to the TR4 and TR5 with quality trim and a walnut dash. The TR6 was fitted with a 2498 cc, six-cylinder, inline engine. The European fuel-injected version of the engine was capable of producing around 150 horsepower, while the US carbureted variant produced 104 horsepower. The TR6 used a synchromesh, four-speed gearbox and was fitted with overdrive that worked on third and fourth gear.