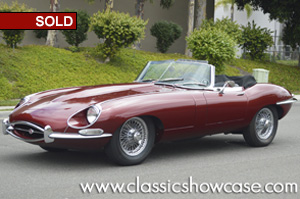 (SOLD) This highly original, single-family owned Jaguar E-Type roadster was built in March of 1967, and was later dispatched to New York and then on to Southern California where it has been kept since. With only 62,069 original miles, it is numbers-matching, and retains its California Black Plates. The Roadster was the subject of a restoration performed by Jaguar Professionals, and presents in its truly original and stunning color combination of Opalescent Maroon, fit with a beautiful Black interior as stated in its JDHT Certificate. The XKE has been carefully stored and driven sparingly since, requiring only routine maintenance. More recently, marque specialist Classic Showcase of Oceanside, CA created and fit a new interior with all of the proper materials, along with a new soft cloth top and matching boot. In addition, master technicians paid strict attention to the integrity of the E-Type’s vital systems and components by performing a thorough inspection over the entire car, performing all updates and services as needed. Adding a touch of uniqueness to this example (and illustrating Jaguar’s transition from one XKE series to next), the E-Type features open headlights, while retaining nearly all of the noteworthy Series 1 features such as such as triple carburetors, toggle switches, arm rests, and earlier model seats, all coveted by Jaguar collectors. Today, this spectacular example is ready to be campaigned at your favorite Concours event, driven on your favorite open road, or simply collected and admired as a great investment.

Launched in 1961 at the International Motor Show in Geneva, Switzerland, the Jaguar XKE echoed the sensation of the XK-120, perhaps even more. An astonishing performance package, with amazing speed and handling, the Jaguar XKE’s brand-new 4-wheel independent suspension system was so well conceived, it was used by Jaguar for over thirty years. The Series 1 4.2 is a very user friendly, sporty driver, and one of the most collectible of the E-Types. These are wonderful cars with a 4.2 liter engine with three SU carburetors and a fully synchronized transmission. Some of the features of this model are toggle switches, full instrumentation with styling and a design that was way ahead of its time with center console, and arm rests. Other features of this Series 1 are its steep windshield and tail lights, which are placed above the bumper line in the rear deck. Similarly, the parking lights are above the front bumper line in the front fenders. In 1964 when the 4.2 was tested, fuel consumption was rated road reported at 22 MPG and a top speed of 140 MPH. 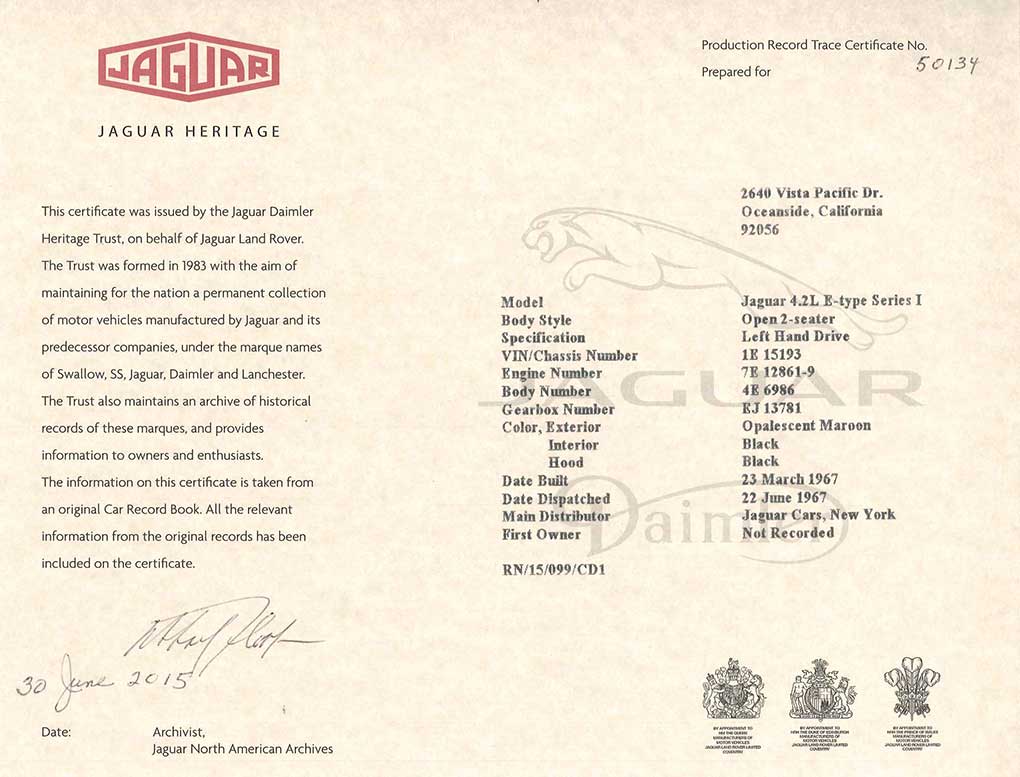