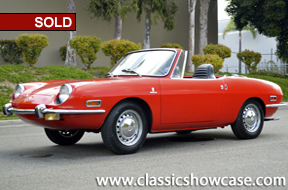 (SOLD) This original Spider has had long term ownership and was garaged for a long period of time in San Diego. The previous owner had restored the body and paint, reupholstered the seats and had re-chromed some of the britework. Recently, Classic Showcase completed the cosmetic and mechanical restoration which included a repaint to the engine and engine bay in the proper colors, a major tune up, a carburetor rebuild, and a full service performed to the engine. The hydraulic system, the suspension, fuel system, and electrical system were all gone through as well. The tires are new, and the rims are newly powder coated, with Fiat chrome hubcaps. A new exhaust system and battery were installed, the previously restored interior was freshened up, the convertible top and bows were restored, a full service was performed and a lot of little details were attended to make this ready for your driving pleasure.

The Fiat 850 is a small longitudinal-rear-engined rear-wheel drive car which was produced by Fiat of Italy between 1964 and 1973. Its technical design was an evolution of the very successful Fiat 600. The body was designed and built by Bertone. The folding roof section made of fabric could be stowed away completely under a rear flap. The Bertone design also featured smooth, essential lines and simple yet elegant details, such as the recessed headlamps equipped with tilted Plexiglas covers to follow the lines of the wings, and the dihedral side panels inspired by Bertone's 1963 Corvair Testudo. This engine ran counterclockwise, a unique feature compared to other engines. In 1968, Fiat revised the successful Spider and Coupé again and gave them an even stronger engine with 903 cc and 52 hp. They were called Sport Spider and Sport Coupé. The Sport Spider body stayed essentially the same, but with a restyled front. The headlamps were moved forward slightly and the plastic covers were eliminated giving the car a "frogeye" look, and the original flush front turn indicators were replaced with units hung below the bumper.