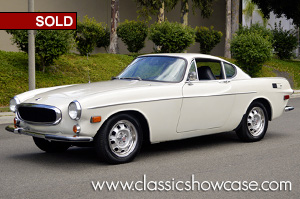 (SOLD) This very original 1972 P1800E is finished in crisp white paint over a black interior with tan carpets. Driven sparingly, the Volvo presents as an attractive car that is ready for driving. The paint and bodywork are attractive and tidy, and the exterior trim is complete and in good condition. The stylish interior features black upholstery, original instruments, along with a AM/FM/cassette stereo. Mechanically, the p1800E features Bosch D-Jetronic fuel injection and the four-speed overdrive manual transmission’s performance is brisk, as the B20 produces plenty of torque. The P1800E is a wonderful driver’s car that is easy to drive and full of the classic styling that collectors and enthusiasts look for - making this Volvo an excellent choice for the new classic car collector and enthusiast.

Prior to the P1800’s arrival, Volvo was well-established as a manufacturer of rugged, dependable cars with a slightly stodgy and austere appearance. But for those in the know, the PV444 and PV544 saloons were also quite entertaining to drive and the Volvo four-cylinder engine responded well to tuning. In an effort to improve its image, Volvo introduced the P1900 sports car, a fiberglass-bodied machine with a tuned “B14” engine that produced 70 horsepower. Unfortunately, it did not live up to Volvo’s usual standard of quality and only 68 examples found buyers. Thankfully, management didn’t throw in the towel, but instead they regrouped and a new car was designed, this time with a more practical steel body and mechanical underpinnings based on the new Amazon/122 chassis. The new car, called P1800, had a dramatic body that was quite unlike any Volvo before it. It was styled largely in-house, though it did get some tweaks courtesy of Frua of Turin, who built the first prototype. The P1800 was a smashing success for Volvo; so much so, they had to farm production of the bodies out to Pressed Steel of West Bromwich, England for the first round of production. To control costs and quality, production then moved back to Sweden and continued through the mid-1970s, with the P1800ES wagon being the final evolution of the model.