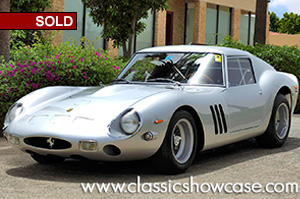 (SOLD) The 1963 Ferrari 250 GTO Berlinetta Recreation being offered is one of the finest of the GTO replicas built, and is based on one of Ferrari’s original road cars of the period, the 250 GTE 2+2. Considered by enthusiasts as the best possible basis for a 250 GTO reproduction, GTEs were built along three series from 1959 to 1963, with a chassis that is similar in its layout and dimensions to that of the original 250 GTO. 3781 GT was built in France during 1988-1989 using original 250 GTE chassis 3781 GT, which was sold new in France and once owned by Jacques Entremont, who commissioned its conversion to a faithfully executed 250 GTO recreation. Alain Garnier, who was one of the first builders of 250 GTO replicas, accomplished the bulk of the work. Its stunningly recreated GTO bodywork features hand-beaten aluminum alloy panels, while its chassis dimensions, brakes, steering and suspension components are of the same specification as those of the 250 GTO. Finishing work was completed by Philippe Billot in Cannes, France, including the glass and Plexiglas side and rear windows for the car. A set of iconic Borrani wire-spoke wheels and Dunlop racing tires round out the exterior package. Chassis 3781 GT is one of the rare GTO recreations that have been awarded FIA papers. As such, it is eligible to compete in the historic racing events around the world and further confirming that this recreation strictly adheres to the original 250 GTOs. Prior to recent track testing, the car underwent workshop preparation and safety checks by marque experts, making it race ready. Given that only 39 original Ferrari 250 GTOs were ever produced and most survivors are secured in long-term possession and rarely come to market, this car offers its next owner a chance to own and enjoy many of the benefits of this legendary race car while realising a substantial savings as an added bonus. Once you slip behind the wheel of this authentic Garnier-built GTO recreation, your thoughts will turn only to the pure, unadulterated driving pleasure that it provides.

As one of the most coveted, revered and valuable automobiles in existence today, Ferrari’s storied 250 GTO Berlinetta continues to carry a mystique transcending all other automobiles, including all but a handful of its own Ferrari stable mates. Originally conceived, built and homologated to contest the World Manufacturer’s Championship as the ultimate development of the brilliant 250 GT, the GTO marked the end of the line for the glorious front-engine sports racing cars of the era, which were quickly becoming obsolete in the face of the growing numbers of mid-engine competitors. In testament to its tractability and tremendous performance, the GTO also represents one of the last true dual-purpose GT cars that were capable of being road-driven to an event, raced to victory and then driven back home again. In just one example, the GTO was famously driven from Brussels to Le Mans and back by Jacques Swaters’ Ecurie Francorchamps racing team after their second-place finish in the gruelling 24-hour event in 1963. As later related by Mr. Swaters, the race-stained cars were even driven to Paris in traffic after the race and parked on the street while the team celebrated their achievement! Certainly, this would not be possible today. The GTO made its competition debut at the 12 Hours of Sebring in 1962, with Phil Hill and Olivier Gendebien sharing the driving duties. According to legend, the pair was initially somewhat perturbed that they were assigned to drive a GT-class car, rather than a faster, prototype-class 250 Testa Rossa. However, when the chequered flag fell, the pair drove their GTO to a sterling second-place overall finish and class victory, finishing behind only Jo Bonnier and Lucien Bianchi in a Testa Rossa. By the end of its relatively lengthy professional racing career in 1964, the GTO captured the World Manufacturer’s Championship for Ferrari over three consecutive years spanning 1962 and 1964, with both class and outright wins at the most prestigious events including Le Mans, Sebring, and the Tour de France. The GTO story is also inseparable from its creators at Ferrari, including Giotto Bizzarrini and Carlo Chitti, as well as its legendary drivers, including John Surtees, Willy Mairesse, Olivier Gendebien, Phil Hill and many other racing legends. However, like many well-used racing cars, once they were replaced by newer, more advanced race cars, numerous 250 GTOs were used in amateur racing and as daily transportation for the well-heeled. Yet, their cachet never diminished. A mere 39 examples were ever built by Ferrari, and by the late 1970s, a phenomenon emerged in the collector car market whereby cars with exceptional performance and rarity saw their market value accelerate rapidly. A paradigm shift occurred, where cars of the value and importance of the GTO were no longer simply viewed as wonderful and usable old race cars. Rather, they came to be appreciated by the most financially capable individuals as representing the automotive equivalent of fine art. Market dynamics aside, the GTO continues to thrill drivers and enthusiasts today with its absolute purity of design and purpose, despite the obvious lack of creature comforts. Perhaps Classic & Sports Car summed up the experience best: “The only in-car entertainment is a raucous, rich engine beat.” Stylistically, though, the voluptuous bodylines of the GTO leave no doubt in the viewer’s eyes that the car is indeed a Ferrari, representing the pinnacle of the automotive world. The rarity, desirability and market value of the 250 GTO has resulted in a movement to replicate the legendary car, and today there are far more 250 GTO replicas than originals. While some poorly executed 250 GTO replicas were indeed built over the intervening years using mundane chassis and glass fibre bodies, a select few have been built on existing Ferrari 250 chassis that are faithful and nearly flawless replications of the original cars. Accordingly, the very best 250 GTO replicas offer nearly the same quality, performance and stunning good looks as the original cars, without the trepidation and depreciation that results when nearly priceless originals are driven, much less raced or – at worst – crashed.