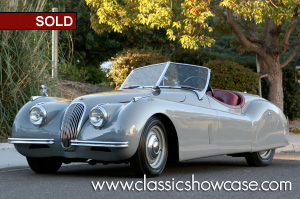 (SOLD) This very stylish XK-120 roadster is a strikingly well-preserved example with a gorgeous color combination, exuding the pure beauty and elegance that is most often associated with Jaguar's XK-120 models. This example has been driven a scant 18,197 miles since new, and brims with originality and patina throughout. Previously, the roadster was owned by 2 prominent Jaguar collectors who always took great care in preserving the car, while driving it sparingly and keeping it's originality intact. It is exceptionally clean throughout, with a tidy engine bay, clean undercarriage, and a striking Red interior. The car is delivered with it's Jaguar Daimler Heritage Certificate, and includes a jack, rear wing spats, and Lucas driving lamps that more than complement its unique styling, illustrating the very essence of classic British motoring. While the car stands in a fine show-driver level condition, it would make an excellent candidate to be taken to a complete show-level standard of perfection with a Classic Showcase restoration. This XK-120 is sure to provide its new owner with the pristine driving experience that Sir William Lyons had in mind over 60 years ago.

During the Second World War, William Lyons and his staff designed what would be the world’s first high-volume twin cam engine. After the war, a short wheelbase chassis and a two-seat sports body were married to this new engine and when the XK 120 was introduced at the 1948 Earl’s Court Motor Show. The XK 120’s body was a fresh, minimalist design with gracefully flowing curves running front to back, while the modern chassis design provided excellent handling. The XK inline six-cylinder engine, originally producing 160 horsepower, was mated with a four-speed manual transmission, and provided phenomenal performance. The XK 120 earned its name from when Jaguar was racing their cars. The car reached 120 mph! 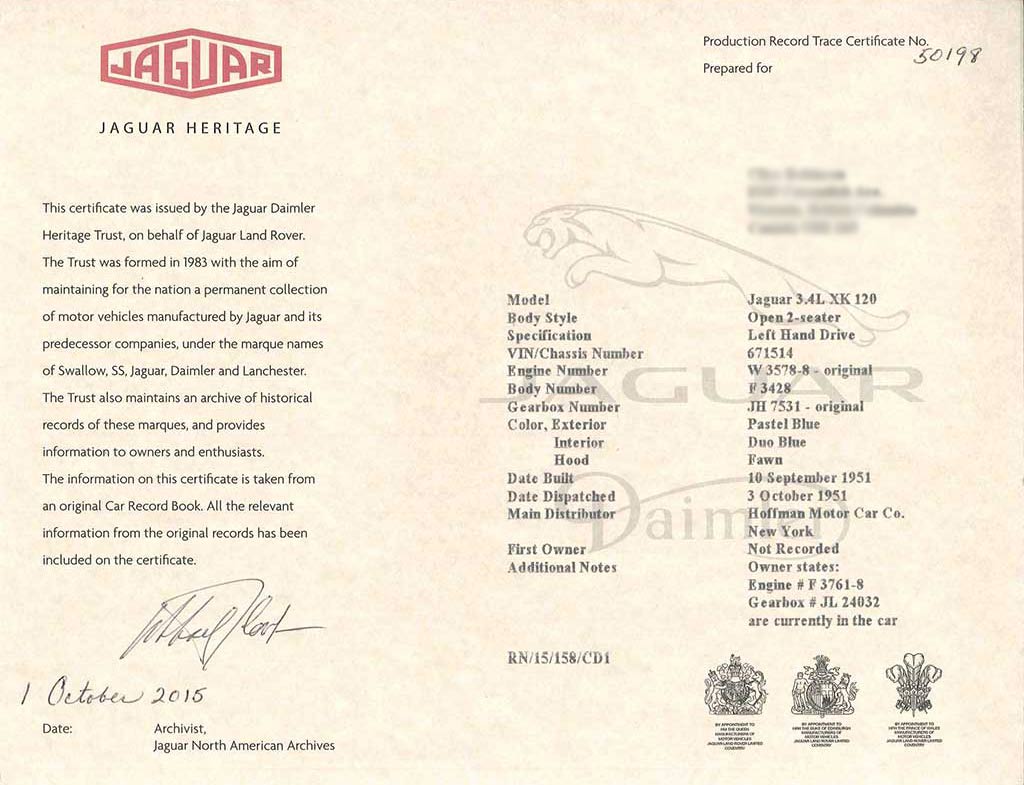