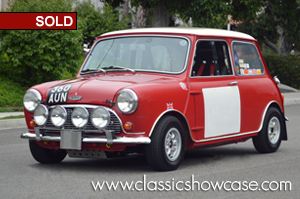 (SOLD) The Austin Mini Cooper S offered here was the subject of a no-expense-spared, bare-shell restoration by renowned Mini expert and European rallyist Peter Valentine, who prepared the car for International Historic Rally competition to Group II Appendix J regulations. It competed successfully in Europe, earning a prestigious class win at the Belgian Historic Rally (a Vimeo video of the car at the Belgian Rally may be seen here, and scans of the logbook and other info are shown below) The Mini features a racy color combination of Tartan Red with a white roof, complimented by a Red and Gray interior with it's original glass kept intact. Since it's importation Stateside, the car has been extremely well cared for, and has been a frequent participant at Shows and Concours events. The Mini contains a vast assortment of Rally options and equipment including: twin fuel tanks, (2) spare tires, (4) 7" Lucas auxiliary lights, and a 5" reversing light; for additional safety, a roll cage, competition seats, fire extinguishers and a 4-point harness were added. The car has complete build and service records, an FIA Historic Vehicle Identity form, a RACMSA logbook, and a copy of the Brit V5 registration document. The Mini has been driven a mere 5,227 miles since restoration, and features a new set of Yokohama tires resting upon a crisp set of Minilite 10" wheels. This classic Mini Cooper S is ready to be shown, raced, or kept as an investment, and is sure to make a fantastic addition to the classic racing enthusiast's collection. 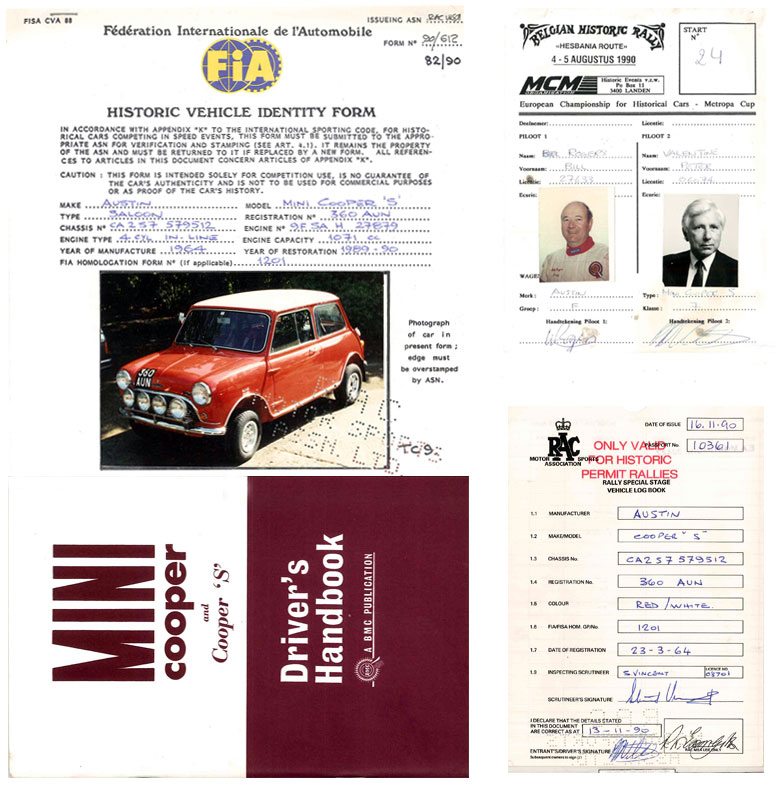 The 1959 debut of famed designer Alec (later Sir Alec) Issigonis’ Mini rewrote the book on small cars. Barely 10 feet long, with a small but peppy transverse four-cylinder engine, 10-inch wheels and front-wheel drive, the Mini could carry up to four adults at 75 mph and achieve nearly 40 mpg. The car was a huge hit, and by the time production finally ended in 2000, nearly 5.5 million had sold. In testament to its groundbreaking nature, the Mini was voted the second most influential automobile of the 20th Century, behind only Henry Ford’s Model T. While initially intended as practical, economical transportation, the Mini, as massaged by famed race-car builder John Cooper, took the international racing world by storm by winning the Monte Carlo Rally from 1964 through 1967, in addition to countless circuit-racing victories. License-built versions of the mini were also produced in both Italy and Spain.