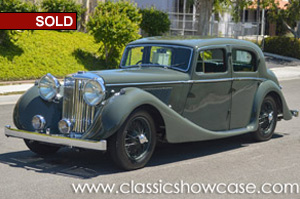 (SOLD) This is an exquisitely restored right hand drive Jaguar Mark IV four door sedan that is a one of a kind piece of Jaguar history. Records show it as a “Company Demonstration Car”, and verified as the car Tested by Autocar Magazine. It was related as being a “front rank car” and “a fine ambassador abroad for the the high quality British specialist car”. In 1980 Paul Skilleter wrote the book “Jaguar Saloon Cars” and featured this exact car in the book on pages 122-124 with the car being photographed at the Dorset House car park. An excerpt from the book reads: “In all respects the body is of “specialist coachbuilder” character, one instance of which is the way in which the doors close…” Sir William Lyons is believed to have owned this remarkable Jaguar at one time. Everything is correct and proper on the car down to the last bolt. All numbers match and it comes with a Heritage Certificate of Authenticity. The car was restored to the original color combination of Sherwood Green with a Suede Green interior and comes with polished hardwood instrument panel, and has similar woodwork on the doors. This remarkable Jaguar has been driven less then 100 test miles since the restoration. This special Mark IV Saloon is for the discerning Jaguar collector who desires an exemplary example with exceptional history.

The Jaguar Mark IV is a saloon car built by Jaguar from 1945 to 1949. It was a re-launch of a pre-Second World War model made by SS Cars Ltd from 1936. Before the Second World War the name Jaguar was the model name given to the complete range of cars built by SS Cars Ltd. The saloons were titled SS Jaguar 1½ liter, 2½ liter or 3½ liter. The two-seater sports car was titled the SS Jaguar 100 2½ liter or 3½ liter. After the war the company name was changed to Jaguar Cars Ltd. Although the post-war saloons were officially the Jaguar 1½ liter, 2½ liter etc., the term "Mark IV" was sometimes applied retrospectively by the trade to differentiate them from the officially named Mark V. Only six-cylinder models were officially sent to America, and these early offerings, quickly gained a following, especially when they were first offered with left-hand drive during 1947. The 125 hp, 3.5-litre OHV six-cylinder engine offered ample power and torque for American tastes, while the large Lucas P100 headlights and upright grille of the Mark IV were welcome reminders of a more elegant, coach built past. All the cars were built on a separate chassis frame with suspension by semi-elliptic leaf springs front and rear. 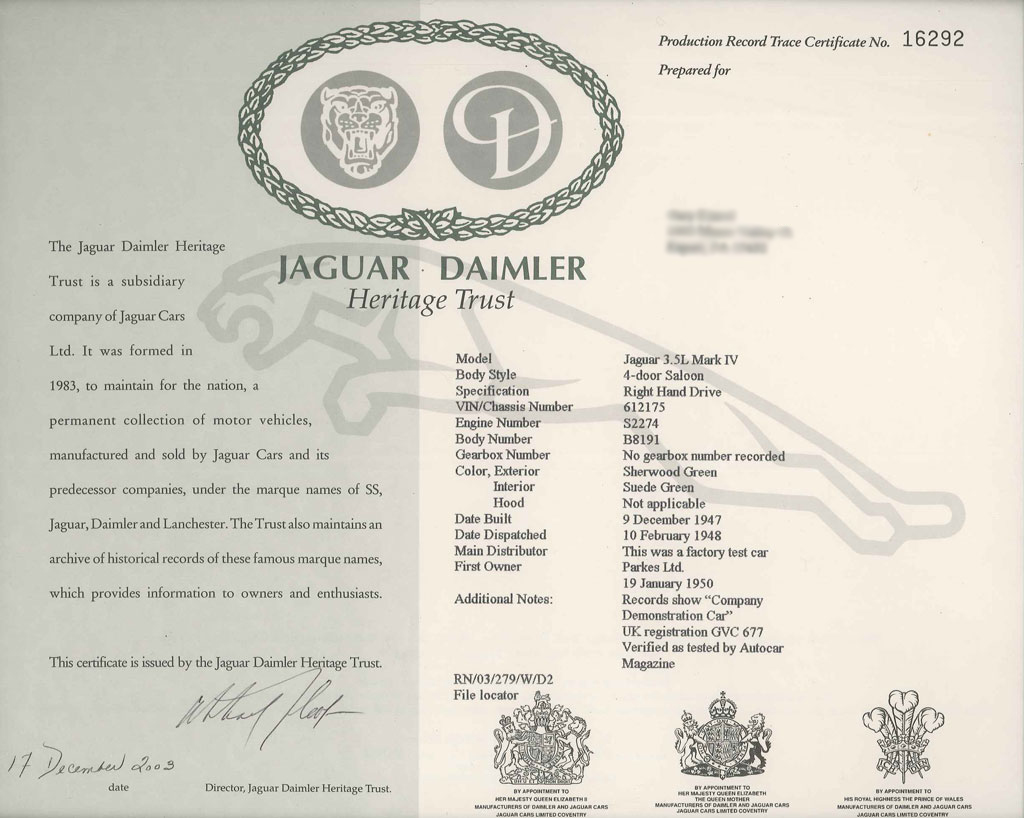