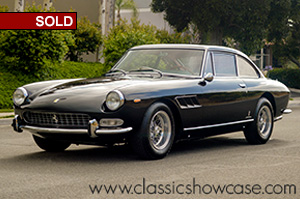 (SOLD) This spectacular numbers-matching, award-winning 330 GT 2+2 example has been thoroughly restored by Ferrari professionals, and is truly one of the finest examples offered anywhere in the world today. As the recipient of a fully documented and proper restoration, this Ferrari recently competed in and took the “Best in Class Award” at the prestigious Cavallino Classic event in 2016. The highly detailed restoration was comprehensive, and included the engine, transmission, and drivetrain, while careful attention was given to the restoration of the Ferrari’s luxurious red leather interior and components to that of a Concours-level standard. Amongst a number of notable features and included options, this Coupé features the desirable 2 headlamp layout, an Ansa exhaust system, and a set of Weber carburetors to provide the best in power and performance. The Coupé's original wooden steering wheel has been restored as well, and the car rests atop a set of crisp Borrani Wire Wheels along with a set of period-correct Michelin XWX radial tires that are sure to provide a smooth and comfortable drive wherever the car is taken. The Ferrari also features books, an extensive log of receipts, and a fully proper tool kit. With only 1,099 330 GT 2+2s produced, this Ferrari is not only one of the most distinguished and recognizable classic marques available today, but is also an excellent Blue Chip investment that is sure to appreciate in value. Now is your time to own an exceptional example of an Italian automotive legend.

View a YouTube video overview and road test of the Coupé below: 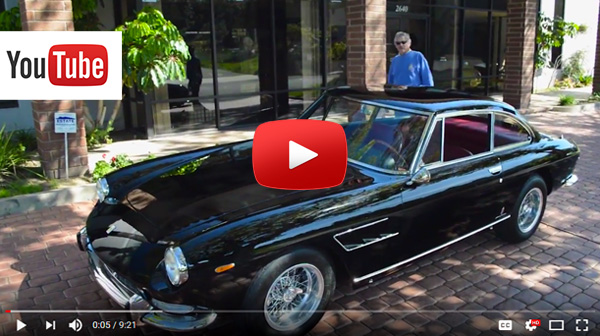 The 250 GT/E 2+2 was replaced in January, 1964 by the new 330 GT 2+2. It was much more than a re-engined 250, however, with a sharper nose and tail, quad headlights, and a wide grille. The wheelbase was 50 mm (2.0 in) longer, but Koni adjustable shock absorbers improved handling. A dual-circuit Dunlop braking system was used with discs all around, though it separated brakes front to back rather than diagonally as on modern systems. The 1965 Series II version featured a five-speed gearbox instead of the overdrive four-speed of the prior year. Other changes included the switch back to a dual-light instead of quad-light front clip, alloy wheels, and the addition of optional air conditioning and power steering. Prior to the introduction of the 'Series II' 330 GTs, a series of 124 'interim' cars were produced, with the 4-headlight external configuration of the Series I cars, but with the 5-speed transmission and 'suspended' foot pedals of the 'Series II' cars. The Chassis was similar to the 250 GT with coil springs and tubular shock absorbers at the front and a solid rear. The Pininfarina coachwork was a departure from Ferrari’s more exotic looks of the past but the car performed nonetheless. Introduced in 1964, the four-seater 330 was overall longer, wider, taller and more powerful than its 3.0 liter predecessor.