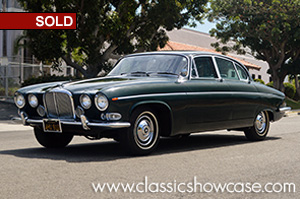 (SOLD) This attractive 420 G sedan is a very original California black plate car that is full of patina and complimented by what is believed to be single ownership by a Northern California resident. The Motor magazine's October 1966 issue referred to the 420 G as "still one of the best looking large cars in the world today", and commented on the similarity of its new radiator grille to that of the 420...This particular example comes in a lively color combination of Opalescent Green over a Black with wood trimmed interior, and runs very well as a daily driver, and features a number of desirable features such as a factory-optional air conditioning system, a Blaupunkt stereo system, original owner’s manual and toolkit. While presently in good running and driving order, Classic Showcase recommends a fresh servicing along with very minor work performed on the sedan to ensure an optimal driving experience. If you have been looking for a great entry-level classic Jaguar as a fun daily driver or one to restore at your own pace, then this 420 G could be just the Jaguar you are looking for!

For the London Motor Show in October 1966, the Mark X was renamed the Jaguar 420G (not to be confused with the smaller Jaguar 420). The 420G was distinct from the Mark X only with the addition of a vertical central bar splitting the grille in two, side indicator repeaters on the front wings, and a chrome strip along the wing and door panels (two tone paint schemes were also available with the chrome strip omitted). Interior changes included perforations in the central sections of the leather seats, padded dashboard sections for safety, moving the clock to a central position, and the introduction of air conditioning as an option; The increasing production of the XJ6 resulted in the 420G being run out of production in 1970.