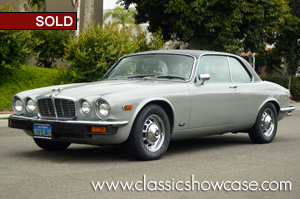 (SOLD) This exceptionally preserved and stylish XJ6C is an original California car with single long term ownership. With only 44,784 original miles driven since new, the car has been very well maintained throughout the course of its life, and has been preserved in storage since 1998. The Sports Coupe features the desire-able pillar-less styling in the window and Top design, further enhancing the Sedan's sporty look. The team at Classic Showcase has woken the car up after long term storage, making it road-ready by performing the following services: a comprehensive servicing to the cooling and fuel systems, including the changing of all fluids including oil, transmission, differential, and brake fluids; a new brake switch in reservoir bottle, replacement of fuel pumps and sending units, hot tanking, epoxy sealing the inside, and painting the outside of the tank in its original color, along with new fuel lines and filters. The carburetors and chokes have been rebuilt and setup as well. We have also added a new battery and fresh set of tires, new hoses throughout, new steering rack boots, front brake pads, turned the rotors, front sway bar bushings, down link bushings, and engine mounts. The interior has been completely freshened up, and includes a new headliner, front carpets, and new foam added to the Sedan’s seats. It is very difficult to find an unmolested XJ6C survivor such as this, let alone one that has been professionally tended to, so don't miss this chance to acquire a truly original example that may be enjoyed by collectors and enthusiasts alike. 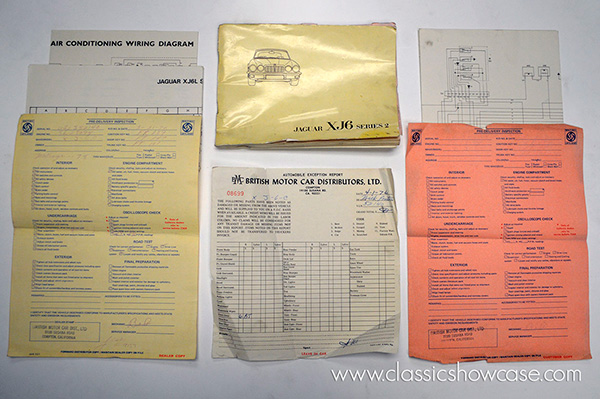 Sir John William hailed the XJ series as 'the finest Jaguar ever.' The 'XJ' designation had been used during the vehicles development as its code name. When the vehicle was introduced, the code name persisted. When introduced it was powered by a six-cylinder engine that came in either 2.8- or 4.2-liter displacement. In 1972 a 5.3-liter V12 unit was introduced It brought mild aesthetic improvements over the prior years. One of the more visual indications of a Series II from a Series I was the smaller front grille. A 3.4-liter engine became available in 1975.