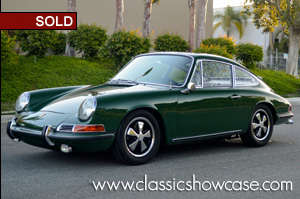 (SOLD) This fully restored, first-generation 911S is a matching numbers example in its original spectacular color combination of ‘6606’ Irish Green over Brown, with Brown Houndstooth cloth inserts on the seats. The car was built for its home-market, where the Mannheim-based Islinger Porsche agency delivered it to the first owner, ex-racing driver, Mr. Wilhelm Sebastian of Weinheim, Germany. Sebastian had made a name for himself when he co-drove a Mercedes-Benz SSKL with Rudolf Caracciola to win the 1931 Mille Miglia road race. He was a factory Grand Prix driver for Auto Union in 1934, and later a mechanic for Tazio Nuvolari. With this great ownership history, the Porsche eventually made its way to the US, where it is believed to have resided in California with one owner for 25 years. In recent years, the 911S has benefitted from a comprehensive restoration to the body, paint, interior, engine, and more; more recently, the Porsche has received full cosmetic and mechanical attention by Porsche professionals at Classic Showcase of Oceanside, CA, and included a major tune-up and overhaul and setup of the Weber carburetors and distributor. The body received a wet sanding and buffing, further enhancing the Coupe’s paint finish. Great features of the 911S include a 5 speed transmission, Weber carburetors, electric sunroof, driving lights, a Becker Europa AM/FM Radio converted to digital with a hidden iPod/iPhone jack, and a set of 5 matching Fuchs alloy wheels. This is a rare and highly collectible first generation 911 model that is a perfect choice for any number of activities, including driving, track competition, showing in events, or simply collecting it for its investment potential.

A modern classic if ever there was one, Porsche's long-running 911 arrived in 1964, replacing the 356. The latter's rear-engined layout was retained, but the 911 switched to unitary construction for the body shell and dropped the 356's VW-based suspension in favor of a more modern McPherson strut and trailing arm arrangement. In its first incarnation, Porsche's single-overhead-camshaft, air-cooled flat six displaced 1,991 cc and produced 130 bhp; progressively enlarged and developed, it would eventually grow to more than 3 liters and, in turbo-charged form, put out well over 400 horsepower. The first of countless up-grades came in 1966 with the announcement of the 911S. Easily distinguished by its stylish Fuchs five-spoke alloy wheels, the 'S' featured a heavily revised engine producing 160 bhp, an increase of 30% over the regular 911, that helped lift the top speed to 140 mph. Other improvements included Koni shock absorbers, a front anti-roll bar for a sportier chassis and more powerful ventilated disc brakes. Over the past 40 years few sports cars have proved as versatile as Porsche's perennial 911, a model that has proved equally capable as a Grand Tourer, circuit racer or rally car. Success in the latter role came only a few years after its introduction, when works driver Vic Elford became European Rally Champion in 1967. In the modern era the 911 has established itself as one of the most popular and successful cars in historic rallying worldwide. 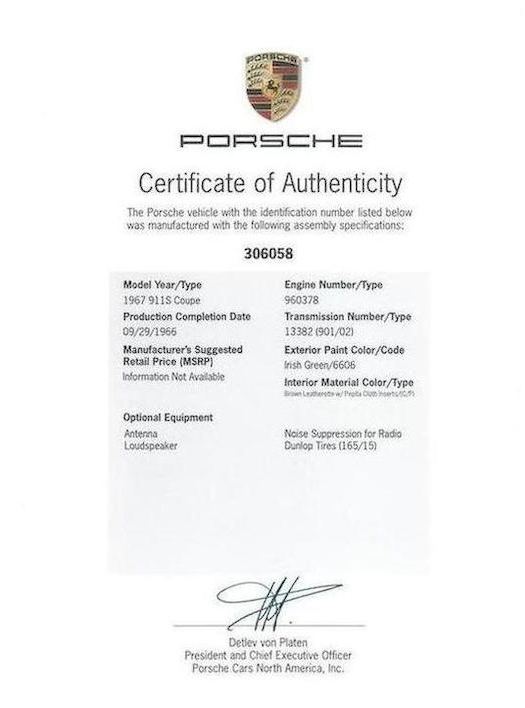